Flora of the Vilches Area

Vilches area is extremely interesting in terms of plant diversity and a must to visit if you happen to be in the area. Many southern species have their northern limit of habitat here, like Nothofaguses (Nothofagus alpina, Nothofagus antarctica, Nothofagus pumilio), Prumnopitys andina, Gevuina avellana, Maytenus chubutensis, Maytenus disticha, Myrceugenia chrysocarpa, and many, many more. In fact many of these species can be found in great concentration here, and their main areas of distribution are considerably more to the south, so that Vilches acts like a genetic island. At the same time, many species from the much drier northern habitats also grow here. Due to this fact the VII Region, where the Vilches area is located, is considered to be the most diverse of Chile, with almost 2000 or about 30 % of different species present. 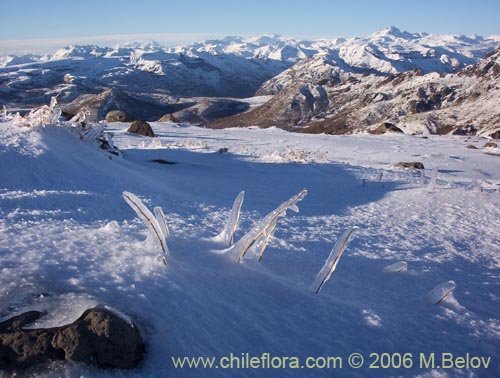 The essence of Vilches – snow and ice during several months in winter remind European climate.

Getting there is easy, Vilches is located about 70 km from Talca on a good road. There are even several buses per day, so reaching it is not difficult. And there is no advantage at all if you come by car, because there are no drivable roads. 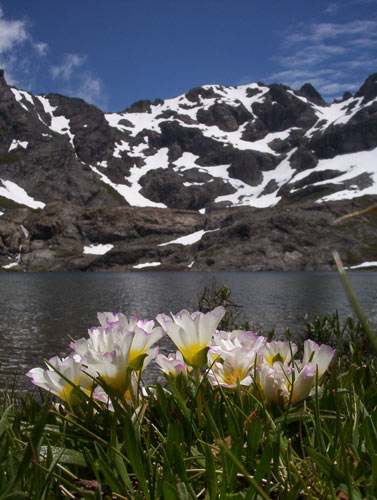 And flowers in spring and summer

Unfortunately, if you do not have previous arrangements with Park rangers, to get to the Vilches Park one must walk a rather long and boring stretch of road (2.7 km) because there is a closed gate. The road climbs from 1200 m to 1400 m and is fenced on both sides, so that that stretch is really a looser. You would just see some Nothofagus macrocarpa on the sides of the road and a couple of the more common plants, like Diostea juncea, and a Ribes or two (Ribes gayanum and Ribes magellanicum), and Hydrangea serratifolia. One is allowed to drive in only if one stays overnight at the camping ground inside the park and pays a corresponding fee (about 15 USD). If you are short on time, it is much better to take the alternative trail which goes to the right from where the closed gate is (see "Piedras Tácitas" trek), because to enjoy the wildlife and flora of Vilches on the trail described here one must go at least 6 km and climb about 600 m before getting into truly wild places. And that means that the track described here is difficult to do in one day. If you use GPS, take the gate as a reference point, since the distances indicated here are straight line distances from the gate. 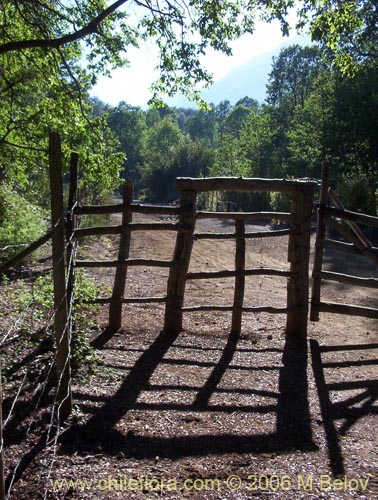 The entrance... to the fenced road to test out your patience.

After passing the administration building (2.2 km from the gate) and paying the entrance fee, one continues along the road for another 600 m. There, where there are more buildings for the rangers and a camping ground, the road splits: one can either follow the main road which goes straight and slightly to the left - that would take you down after a steep descent to the Lircay river - while beautiful, in terms of flora not very rewarding. From there, crossing the river (easy) one can continue to the Loma de Sillahur, a long trek rather poor in plant life compared to the other routes. 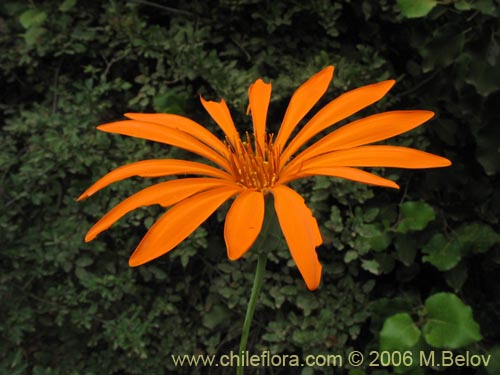 The better option is to turn right (to the Enladrillado / Laguna Alto trail). In terms of vegetation diversity, the Laguna del Alto trek is better then Enladrillado. For the next 3 km. there is one trail only. The trail climbs a little bit and continues more or less level (at an altitude of 1500 m). This stretch begins to become interesting. The most impressing sight is the Nothofagus dombeyi wood with enormous trees of 2 - 3 meters in diameter (usually around ravines and water courses) alternating with Nothofagus obliqua. Under its shadows many smaller plants can be found: Berberis darwinii and Berberis actinacantha which have blue edible berries, medicinal Buddleja globosa (around water courses) and the Mutisias - an endemic South American genus, with easily observable Mutisia cana and Mutisia decurrens with big and prominent red and orange flowers, respectively. You would also find Alstroemeria presliana ssp. presliana, Geranium, Stachys, Rhodophiala splendens, Leucherias, and Calceolarias (Calceolaria dentata ssp. araucana) along the trail. In the smaller ravines you can find Sisyrinchiums, Vicia magnifolia, Fuchsia magellanica, the latter with edible greenish fruits (around January - February) and beautiful red flowers, the nectar of which is a staple food for the local collibris. If you decide to climb up any of the smaller ravines (there is especially interesting one about 3.6 km. straight line from the entrance) you can stumble on Corynabutilon viride, a rare endemic Malvaceae plant which grows at an altitude of about 1700 - 1800 m. Beware that climbing directly off trail is very difficult because of the vegetation and you will definitively come into very dense shrubs higher up - so, unless you are a fan of jungle-style progress (without machetes of course, since they are obviously off the limits in this park) this option must be considered carefully. Especially if you get lost there and come into the thickets of chusquea (bambus), you may be in for a not very pleasant experience. 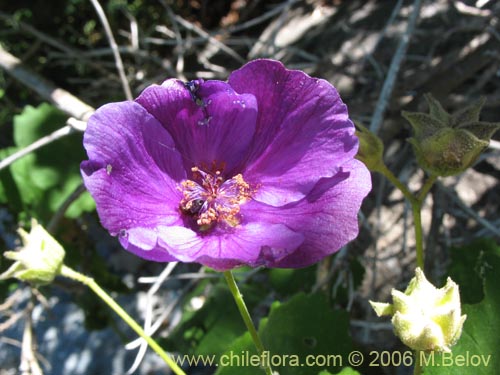 At about 4.8 km from the entrance there is another bifurcation (well marked): the main trail continues straight, and the trail to the right begins a long climb to Laguna del Alto. The trail climbs steeply from 1550 m. to 1800 m. where it comes out of the wood of Nothofagus macrocarpa. Here begins one of the more interesting parts of the trek. Right at the timber line there is an explosion of species numbers, both of shrubs and of smaller plants. At the timber limit you will see Azara alpina with beautiful red fruits difficult to miss when ripe (around February), Escallonia virgata with white flowers and sickeningly sweet smell (around water courses and in January), Senna arnottiana with big yellow flowers and then with yellow fruits, and the first plants of Nothofagus antarctica. Also, groups of a white-purple Calceolaria cana can be seen here and there. A relatively rare Berberis rotundifolia grows in the abundance in the same area (altitude 1700 - 1800 m. in clearings (you would have to go off the trail to find it)). 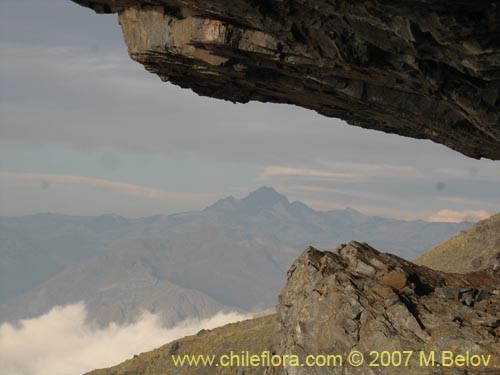 The barren slopes slightly higher up (1800 - 2000 m.) are full of small plants: the yellow bulbous Rhodophiala montana (1800 - 1900 m. November - December) mixes with pink Rhodophiala rhodolirion (slightly higher up at 2000 m. and around December - January) and in the contact zone they seem to hybridize to produce orange-colored flowers. Several adesmias are also present, and the yellow flowers of Viola maculata would accompany you all along a better part of the trail. Yellowish-red low growing Mutisia linearifolia is also ever-present. Later in season (February) you will see the Alstroemeria exerens and a little off the beaten track, in small ravines you may find Alstroemeria pseudospatulata; this latter, with beautiful yellow flowers is more common on the other side of the mountain (see the Piedras Tacitas trek). 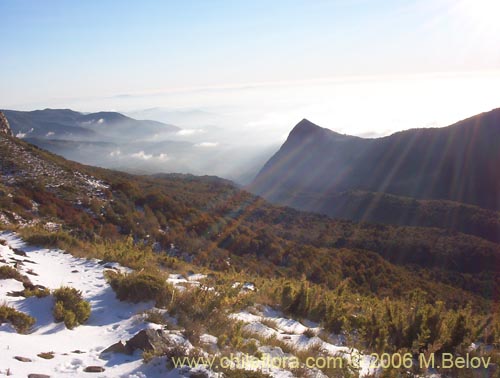 Coming out of the wood: High Andean steppe in winter.

The trail climbs up to 2150 m. and comes into a relatively flat field about 1 km. long where there is another cross-road (marked). To the left, the trail goes to Enladrillado (less recommendable for plant watching, although there you might stumble upon the extremely rare Bipinnula apinnula, there are only a few spots known with a few dozen individuals), and straight and slightly to the right the trail continues to the Laguna del Alto. If you have time to spare and want to see more plants, you would be well advised to try to climb to the right along the ridge (no marked trail there) heading towards the El Peine peak (visible almost immediately from the trail). This area has a tremendous field of Rhodophiala rhodolirion and a few Azorellas. You can also see the rather rare Dioscorea volckmannii, Nassauvia aculeata, and Olsynium frigidum if you stay close to the ridge. 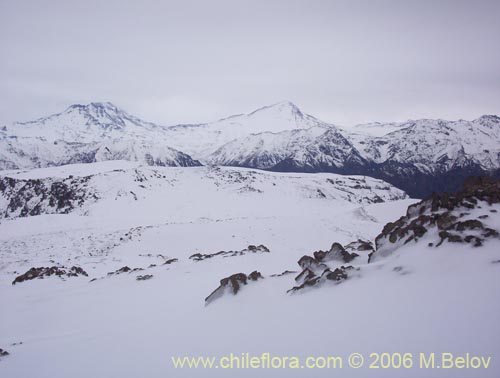 Climbing Peine in winter. In summer, the slopes are covered by low, stunted, high Andean vegetation

The trail which continues straight to Laguna del Alto is not very interesting here except for the large fields of Calceolaria arachnoidea with its dark-purple flowers. But then you come to a ridge, and the opening view is stunning: 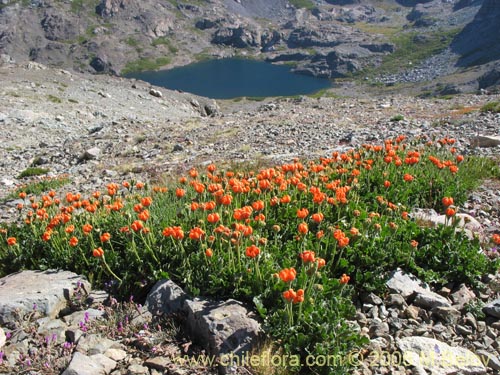 Laguna del Alto in summer, with Loasa lateritia in front.

Laguna del Alto is a lake formed in the crater of an extinguished volcano. It has very special microclimate – despite an altitude which is only 2000 m, it is surrounded on all sides by steep ridges which creates ideal conditions for accumulating snow. In this area the snow may linger up to 8 months, from May through December. So this makes it a real test bed for finding out which plants are hardy and can resist harsh winters. 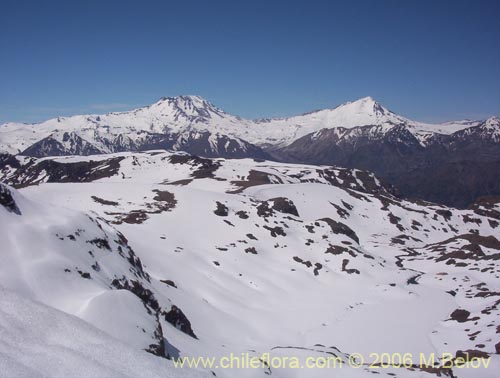 The Laguna del Alto is covered by snow and ice during several months in winter.

The area around Laguna del Alto is the best and most interesting part of the trek and ideally one would have to stay overnight there to be able to enjoy all the plants and the sunrise scenery that can be found there. There are several plants with edible berries, like Gaultheria pumila, Gaultheria caespitosa, and Berberis montana, at least two species of Ourisias, Ourisia alpina and Ourisia ruelloides, several Calceolarias, including the more common Calceolaria corymbosa ssp. mimuloides, and the endemic Calceolaria undulata, in the water courses you would find Calceolaria arachnoidea and Mimulus luteus. On drier spots slightly higher up there is Nassauvia digitada. 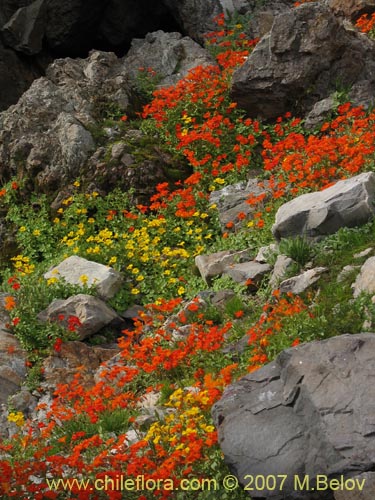 Yellow and red Mimulus form an unforgettable kaleidoscope of colors.