Finca de Chañaral – A Trip to the Plants from Stone Age

Inca de Oro is a small village half-way between Copiapo and Diego de Almagro and is the starting point of the trip to two very interesting places – Finca de Chañaral and Vegas de Chañaral. Its name is very suggestive – it is located on an ancient Inca trail and is a focal point for many mines from where copper and obviously gold was extracted.

The relation between an Inca trail and plants is by no means accidental - the network of Inca trails was designed to lead from one water source to another, usually at a distance which can be covered in one day on foot, where the resting places or tamboes were located. Inca de Oro is one such tambo, and Finca de Chañaral is another. 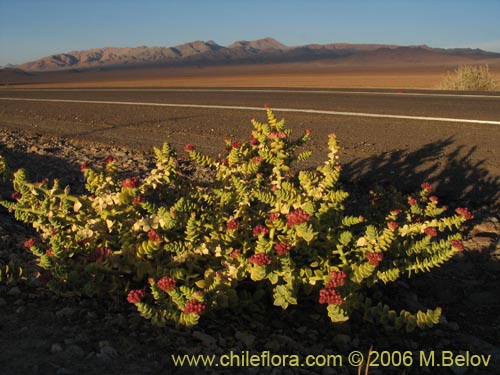 This sturdy Cistanthe plant can survive thanks to the intervention by modern civilization - the road is a life-line in this dry area even for plants.

The area around Inca de Oro and along the highway is very lonely, empty, and dry. No tree, no shrub, no plant can be seen in the distance. However, on both sides of the highway there is a great number of beautiful desert plants. Strangely, a highway in these areas rather then destroying creates a new habitat for the plants. In the morning the water condenses on and then runs off the tarmac. And when it rains – at best just a few times a year - the runoff from the tarmac increases the available water by a factor of two or three. Finally, the tarmac cover prevents the evaporation of a good part of this runoff. And the vehicles take part in seed distribution. Here native plants do not have to fear competition from foreign, exotic plants, the latter simply can not survive in these arid conditions.

Result – biodiversity along the road, a symbiosis between the usually destructive civilization and thirsty plants. 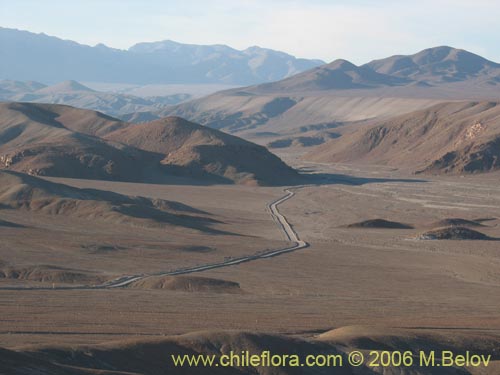 This access road to the Finca de Chañaral from Diego de Almagro is typical of the area.

A road east from Inca de Oro takes one to an oasis – Finca de Chanaral some 20 kilometers away. The dirt roads are surprisingly good here because of the heavy mining machinery and the trip is quick and easy. The road suddenly reaches a shallow canyon some 50 – 100 meters deep. At first, a few trees of Acacia caven suggest that some source of water must be nearby, and a few hundred meters further a lush green parch of vegetation unmistakingly announces the presence of running water. 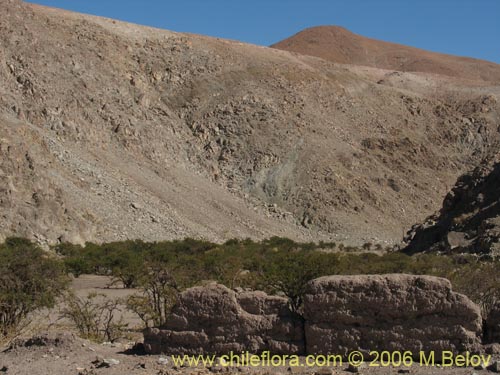 The upper part of the short Finca de Chañaral valley when coming from Inca de Oro.

Finca de Chanaral has a history of many thousands of years – it was inhabited long before the Spanish conquerors, long before the Incas,.. its past dissolves in the dark ages of the first inhabitants from the stone age. The walls of this canon are covered by paintings. This is not strange at all, because it is one of the few water sources in this arid area and its vegetation must have attracted the guanacos. In fact, many paintings deal exactly with this subject – fertility of guanacos, a synonum of survivial for the people. 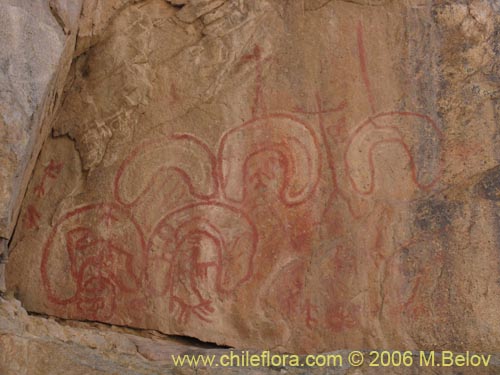 Precolumbian paintings indicate that this place had an owner.

Today almost all of the water is trapped for mining purposes – a huge pipe extends for kilometers and kilometers all across the arid plane, robbing the native vegetation of the most precious resource – water, a lifeline here. Some signs of the encroaching desertification can already be seen in the upper part of the valley, where the underground water level must be lowering. 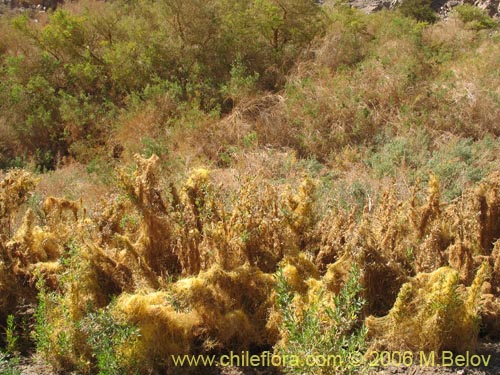 Still, the central part does not seem to have lost much of its original atmosphere. The centerpiece here is the Chañar, Geoffroea decorticans, a quite draught resistant tree with edible fruits and beautiful bark. Just a few individuals can still be seen here. Prosopis alba var. alba, which also has edible seeds, together with Acacia caven, occupy even dryer areas in both extremes of the canon. Occasional shrub of Atriplex rounds up the woody plants of this enclave. Pluchea absinthioides is very abundant here, covered by Cuscuta, a parasite plant with small white flowers which seems to thrive here, covering its host with a net of delicate golden-yellowish stems to form what seems to be human hairs – hence its common Spanish name – Cabello del angel, Angel’s hair. Cortaderia speciosa borders both banks of the brook. 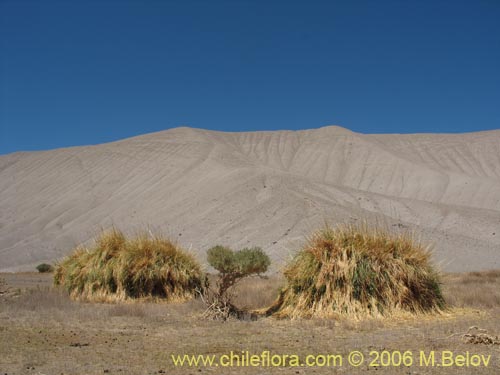 Another interesting area lies some 20 km. up the valley. To get there, one has to follow the road from Finca de Chañaral south for a couple of kilometers, and then turn left towards east to gain altitude of some 2000 meters. Here another oasis with even more lush vegetation can be found, with basically the same set of species as at Finca de Chañaral. This area is bigger and has some spectacular plants of Cortaderia speciosa some five meters high in its upper part. As is the case with Finca de Chanaral the presence of modern civilization is also clearly visible – a house, a radio antenna, vehicles... 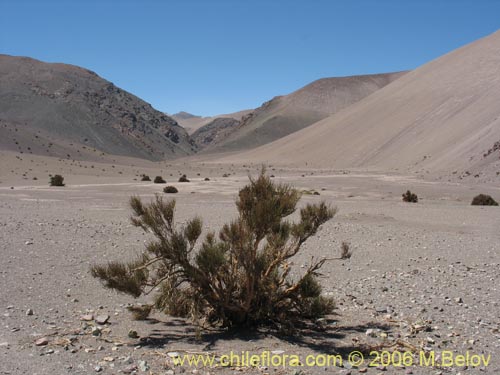 One can continue further into the mountains on a relatively good road which climbs very slowly to well above 4000 meters over some 30 kilometers. Already from 2500 m. more vegetation begins to appear here and there, and not only in the dry riverbed, but also on the sides of the valley. It consists now mainly of the characteristic Ephedra breana shrubs, and a beautiful cactus with delicate needle, which forms reddish colonies - Maihueniopsis colorea. 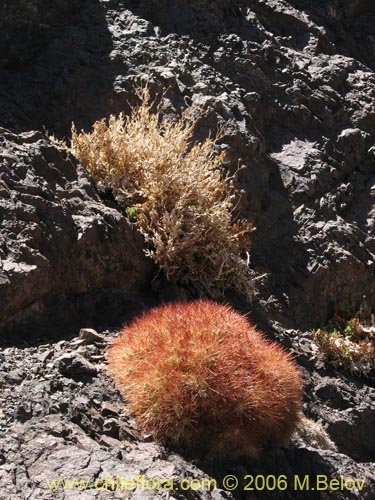 Further up flowing water sprouts here and there from the ground, allowing more plants to grow. Several small and extremely narrow “vegas” measuring only about 10 – 30 meters intermittently appear. Some of them are occupied by crops and even a few fruit trees are planted along the banks. 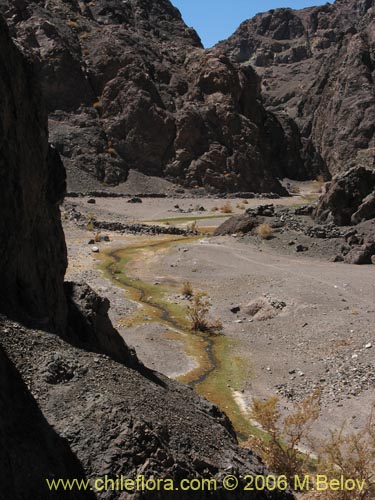 Half-way up the valley, the brook manages to sustain vegetation just a few meters wide.

Surprisingly, even in this forlorn place lives a family with a few goats, a couple of horses, and a pack of emaciated dogs. The “vegas” higher up provide feeding grounds for a few stray guanacos, and other species, like Lyciums and Haplopappus liven up the dreary landscape. Since at the time of the visit they were not in bloom, it was not possible to determine the exact species... 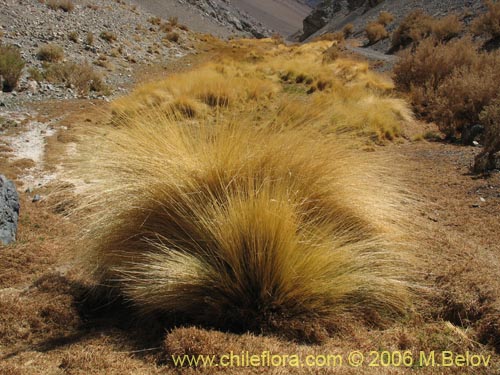 The trip ended at 4000 meters, because shallow, but rock hard snow banks began crossing the road, trying to throw the car off the track, making further progress impossible. It was still September, early spring...