Most of the weeds in Chile are of foreign origin, mainly from Europe and Asia. According to Oscar Matthei, out of 536 weed species, 329 are from Eurasia. Americas account for only 170 species, while the rest of the world for about 30 species. (MATTHEI 112) While there is a number of Chilean species that have an importance as weed plants, they are not very viscous and do not represent a major threat.

One of the most problematic species is the Rubus ulmifolius (blackberry). It was introduced as a fodder plant from Central Europe and propagated itself rapidly in the 19th century all over the central Chile. (TEILLIER n.p.) Its only limiting factor is its requirement of water, and this reduces its damaging potential in the rather arid northern zone of its distribution, where it grows only along irrigation channels and water courses, forming impenetrable and potentially deadly thickets. Towards south its damaging effect is somewhat reduced by the more exuberant native vegetation which limits the light and its growth capacity. Despite its damaging nature, the plant produces edible fruits which sustain a whole jam industry in the 7th Region, where whole villages go out and collect the fruits in January and February for selling it to the jam processing plants.

On several occasions the author got caught up in the thickets of this plant, and the experience was really terrible; in one case, a progress of 300 meters took 2 hours, torn-up pants and jacket and considerable lacerations. If in doubt, do not take it lightly and do not count on crossing deep ravines with the slightest sign of this plant - it is going to be terrible! The branches are very flexible and have extremely sharp thorns which are bent backwards and effectively catch the unwary. 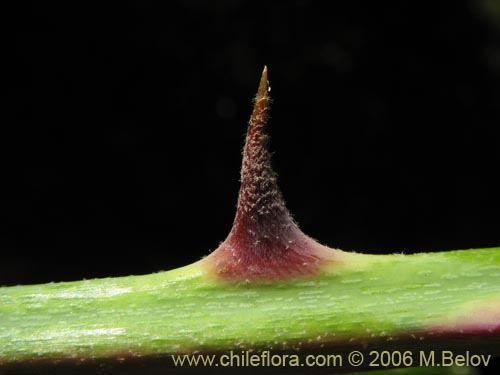 The botanist's nightmare in Chile: Thorns of rubus ulmifolius.

Another plant with similar problems of creating impenetrable barriers is Rosa rubiginosa which has its centre of distribution around 8th Region. While the thorns are even bigger than those of rubus ulmifolia, it is somewhat easier to deal with because its branches are more rigid and can be pushed aside. 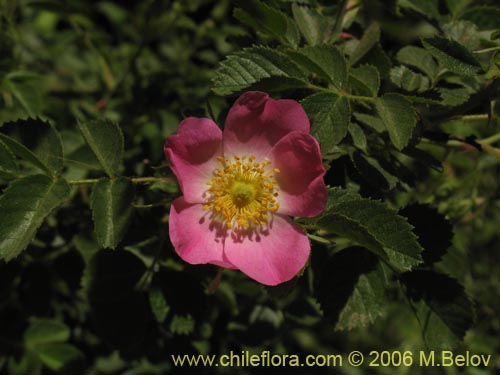 Some of the weeds are very beautiful plants which can give a nice touch to the local landscape. This is the case for instance with the Cytisus striatus. Despite its foreign origin, it seems to integrate well into the local environment, and due to the beauty of its flowers as well as of its fruits, the persistent hairy legumes, can be regarded as an ornamental shrub par excellence, especially considering the fact that it is very easy to propagate and grow. In Chile, there are entire highways where the plant covers the borders, and in spring the yellow flowers which appear in large numbers on the long, thin branches which oscillate slowly in wind create a sensation as if one is navigating a tropical river with yellow cascades flowing in from both sides. Later, when the seeds appear in hairy whitish legumes, the tone of the roadsides changes to more subdued and sober accents, which are nevertheless equally beautiful, because now the plant emanates tranquility and softness of the approaching autumn. 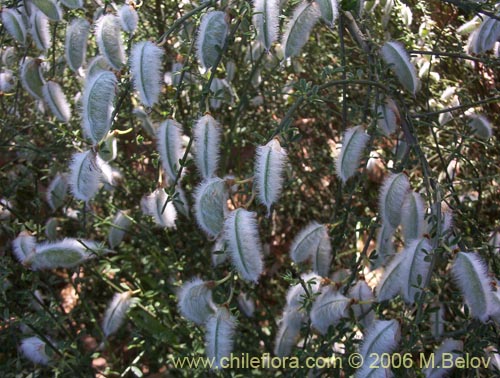