Putre: Between Sky and Chile

Putre is one of the few villages in Chile which is located in High Andes, in this case at 3550 m. Chile is a country of high mountains, with many peaks reaching over 6000 m. all along the country, but villages located higher than 3000 m. are few and all of them are located either in I or XV region (there is only one exception, Ollagüe, but this small village is only 30 km. away from the border between the I and II Region.) 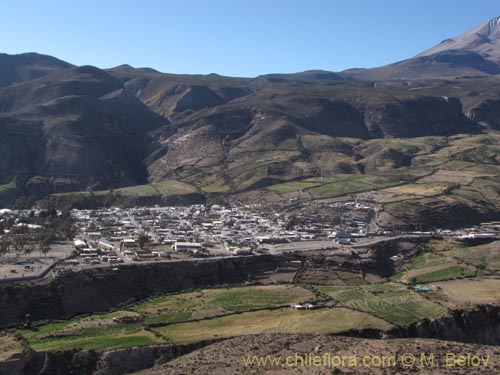 Putre, a village with about 1500 inhabitants, which has only 20 blocks, with very good communications (telephone, internet, mobile phone coverage) and even a bank.

In this sense Putre can be seen as a good example of the high Andean culture. And this is even more so because it is the capital of Parinacota Province, a vast area where a good part of the Indian population dedicated to high-altitude pasturing lives. 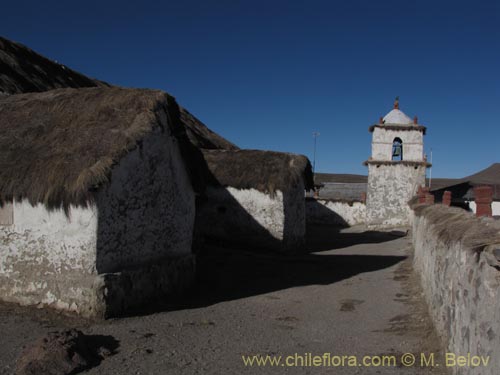 The Church and village of Parinacota, at 4420 m., with hardly a few dozen of families living permanently there. This village gave its name to the Province of Parinacota and even forms part of the official name of XV Region - "Arica y Parinacota". 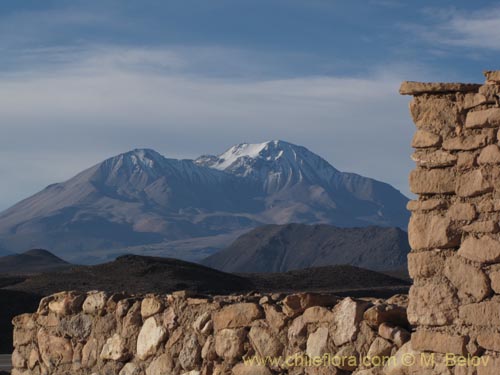 The plants mean food for the animals and therefore life for the humans in the area. All this area around Putre at altitudes above 2500 m. is sprinkled with past villages, trails, storage areas, etc. The Tambo of Zapahuira, the wall of which can be seen in this photo is one of the many examples of this past human presence. In the rear one can see Nevados de Putre, the mountain which dominates the village of Putre, hidden below in the valley, and which reaches almost to 6000 m. Around Putre there are dozens of Pukaras, Tambos, and other settlements.

Once you arrive at Putre, the general atmosphere seems to be from a country different from Chile. Putre may be in Chile, but it is not a Chilean village. Even the drinks of Coca-cola at the local shops are replaced by Inka Kola, a high Andean trade mark. The people wear Bolivian outfits, speak with a different accent, and have different customs and interests. In a word, if you do not know that Putre is in Chile, you would never say so; you could perfectly think of it as being located in Peru or Bolivia. 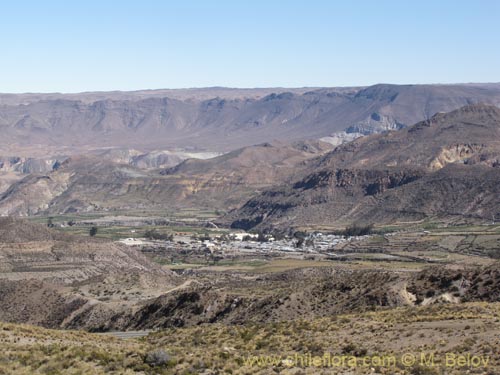 Despite the small size of the village and its geographical isolation, Putre has all the modern communications network, paved roads, electrical power, telephone, internet, mobile phone coverage, even a bank. And it is quite notorious that the government is heavily investing in the development of this area - an endless traffic of state vehicles of municipality, road inspection, labor inspection, Conaf, police, ambulances is a good proof of this commitment. Any other village or even a small town in the central or southern part of Chile would be quite envious of the resources which are invested in the area. And these investments are not mere tokens - they are required to prevent the budding of separatist feelings in the indigenous population. In fact, the splitting of the former I Region just a few years ago into two independent Regions, a reduced I region and a new XV region, was done mainly to give more independence to this frontier area.

Putre is an excellent place to acclimatize to the altitude and to get to know the plants of medium and high elevation. To see the plants in bloom in Putre area (3000 to 4000 m.), the best moment is around March through June (a couple of months after the rainy season of January and February). The bogs (Bofedales) generally enter in bloom from September onwards, when the environmental temperature rises (there is no lack of water there, so their blooming is not dependent on precipitations). January and February are not such a good choice to visit the area due to the possibility of snowfall which may cut off roads.

If you are a budget traveler and would like to see the plant life here...

Putre is one of the few places in northern Chile where it is possible to make botanical trips cheaply and without a vehicle. There are several cheap lodgings at Putre with the prices going around 12 to 15 USD per person. To visit areas which present botanic interest one can perfectly do without a car - several of the most interesting areas can be accessed directly on foot from Putre or one can ask to be taken and dropped off at these locations to return on foot or hitchhike back (in case of the main highway this is very easy (and safe), because there is a lot of traffic in the area). The areas which we recommend to visit in this way (without vehicle) are: 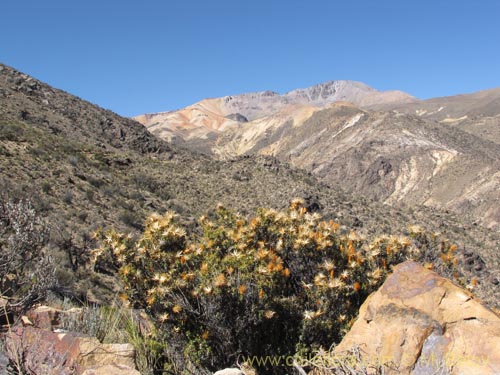 A typical scene when walking up the mining road.

Driving from Putre to Arica, about 7 km. from the crossroad which leads to Putre (about 11 km. from Putre) there is an unpaved road on the left which climbs over the main highway. This road is ideal to check out on foot, the road does not climb much (from 3750 m. to 3950 m.) and is rather short (the most interesting part is the stretch which climbs up to a crest where there is a sharp turn to the left (about 1500 m. away from the main highway) and then maybe another 500 m. on a more level stretch of the same road. Beyond that point there are hardly any news species. In this area you can probably see around 30 species.

Old unpaved road which goes down from the International Highway to Putre.

To get to the starting point one has to drive on the paved highway some 10 km. up (towards Lago Chungara) or there are also many vehicles which drive directly from Putre on this road (this the route many take when going to Lago Chungara). The whole downward trip is about 7 km. long and goes from 4150 m to 3550 m. (it can be easily done in two hours without stopping for the plants). Especially the last two kilometers have many interesting species.

Finally, even the paved stretch from Putre to the International Highway (about 4 km.) is also very interesting and offers at least 20 species.

If you are in good physical shape and well-acclimatized to the altitude (at least 4 nights at Putre and one visit to higher areas, like a trip to Lago Chungara), you can try and go to the 4800 m. high point on the road to Visviri (there is an incorrect road sign stating "5250 m" altitude). (See the article on the plants of extreme altitude); (it is about 10 km. on the paved road up to the military barracks and then another 15 km. on a unpaved road; there is occasional traffic and even very rare public transportation; check out in Putre). This is a rather heavy excursion because it involves a lot of high-altitude walking. After visiting the pass (to admire the plants there fully you would certainly spend at least one hour), you have to walk back along the road for 5 km. (there are many different species to be seen along the road, so it will hardly appear to be boring). From there you would abandon the road and go down on the plains and/or narrow valley (it is up to you to choose the way). The full backtracking is about 12 km. and goes from 4800 m. to 3500 m., it can be done in around 4 hours without calculating the time necessary for plant-watching. You can see almost 50 species on this trek. 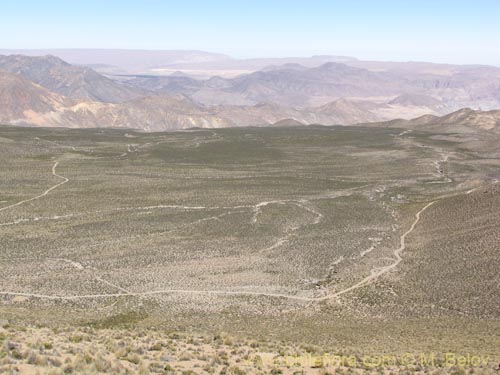 Roads which will take you to Putre, as seen from the intermediate point at 4300 m.

Putre: the entrance to the other world.

Chunagara Lake is located at an altitude of 4550 m and is just an hour away from Putre. 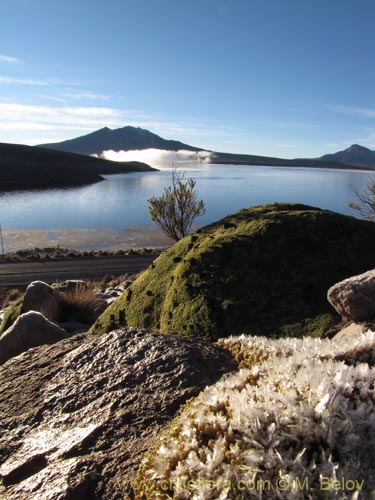 The Lake Chungara softens the harsh Altiplano climate around it, making it somewhat less extreme, warmer, and more humid. 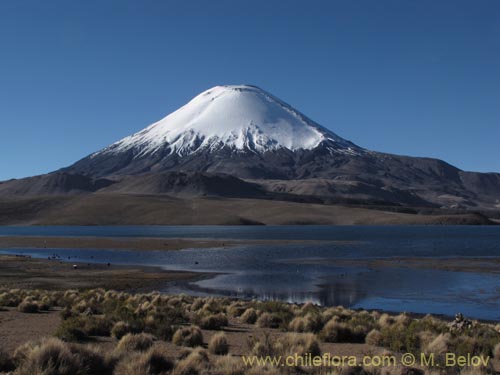 Parinacota Volcano towers more than 6300 m. above the Lake Chungara

That makes it an excellent nesting site for many species of birds. 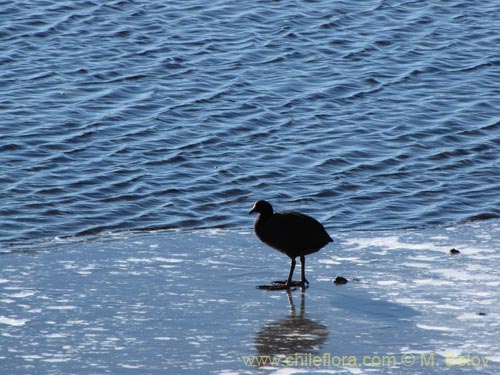 Tagua Gigante (Fulica gigantea) is one of the most frequent and visible habitants of the Lake Chungara.

Partial List of Plants which can be seen in Putre Area