The hardies cacti in the world

The cactaceae of Chile present a very interesting group of plants, quite different from what one normally may expect. There are about 180 species and subspecies in Chile and they concentrate in the northern, dry regions of the country, between the 1st and 6th Region, with the centre of diversity around 4th Region, but they grow all the way down to 11th Region. The Chilean cacti have several very special features which make them unique among the world cacti. 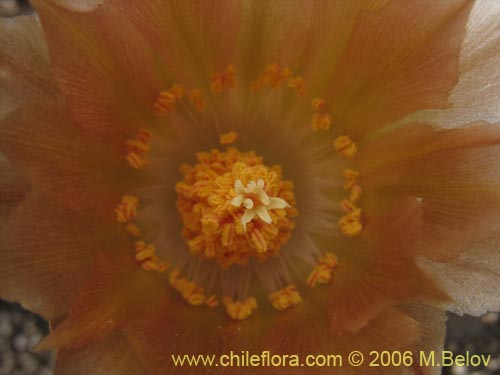 In the first place, and that may be the most surprising matter, there are several species which routinely live under snow. One of the most resistant cacti is the Austrocactus philippi. This species lives as high as 2200 m. above the sea level in the 7th Region, where there is snow cover for more than 4 - 5 months in winter and temperatures around - 10º C with lowest temperatures reaching - 15º C! This plant can perfectly survive continental European winters; in fact, its limitation are the high temperatures, because it does not tolerate temperatures higher than 25º C. This species is also one of the most rare ones, because currently only one location is known. Another location at 2000 m. described in the literature was presumably robbed out, since no sightings were reported lately for it. At the known location only 15 to 20 groups of this cactus are present; each group is an agglomeration of about six to 20 bodies which seem to be connected at the root level (we have not tried to uncover them in order not to damage this rarest plant of Chile). This cactus is very difficult to see in the terrain, and until you virtually sit on top of it you would not know that you are there. For this reason spotting new populations is extremely difficult task. The only opportunity for finding new locations may be during the short period when the cactus is in bloom, around end of December - beginning of January during about three weeks; but even then, the brown colour of the petals still makes it difficult to spot. 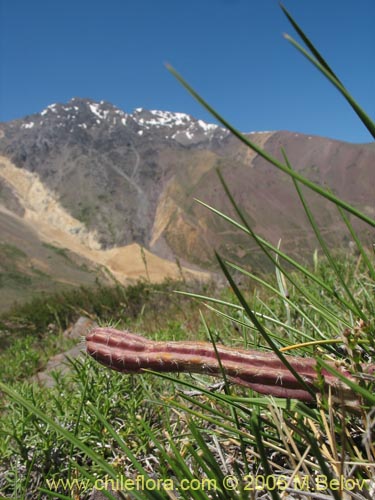 Several more cacti have also high tolerance to cold, although not as high as Austrocactus philippi. Among them is the close cousin of Austrocactus philippi, Austrocactus spiniflorus, which lives in the mountains of Santiago at altitudes between 1500 and 2500 m. Since it lives about 250 km. to the north from A. philippi, the climate there is somewhat warmer and this cactus is covered only occasionally by snow and the minimum temperatures are also somnwhat warmer (rarely below -5º C, with occasional frost of up to -10º C). It is also a relatively rare cactus; it can be easily seen at the El Morado Natural Monument (at an altitude of about 1900 m; it is located on the moraine, about 600-800 m from the Park Ranger house (the entrance to the park) - head straight west from the entrance). Another related and very rare cactus in Chile is the Austrocactus patagonicus which grows in the 11th Region.

Another cold-resistant cactus is the Maihuenia poeppigii which lives in the 7th and 8th Region at altitudes of 1500 - 1800 m. It forms large, low carpets of about 2 m. in diameter. There are also other cacti from the northern parts of Chile which are able to withstand cold freezing temperatures, like the Cumulopuntia boliviana, but which do not have prolonged snow periods.