Where the plants live off from fog...

Paposo is a small village on the Chilean coast, about 50 km. north of Tal-tal and some 200 km. south of Antofagasta; it has a population of about one thousand persons who live of mining and fishery. The area around this village is shaped geophysically in such a way as to produce dense coastal fogs or "camanchacas": a narrow coastal plain of about 500 to 1000 m. wide with a soft slope of about 5 to 10º, and then a barrier of steep slopes inclined at 30 - 40º and with an elevation of about 500 to 800 m., an altitude which they reach about 1.5 to 3 km. from the shore; from there on, the slopes get considerably softer and gain slowly altitude, reaching a maximum elevation of about 2000 m (Yumbes peak with 2392 m and Matancilla Peak with 1866 m). These higher elevations are not so much important for generating the coastal fogs, which usually run out at about 1000 m., but for efficiently catching the water during the rare episodes of heavy rainfall and which are responsible for a larger quantity of flowing water (there is considerable more flowing surface water than in areas more to the south which receive more precipitations, such as Pan de Azúcar.

The steep barrier slopes are cut every 500 to 2000 m by deep ravines or very narrow V-shaped valleys with lateral slopes of up to 50º and a depth of 100 - 200 m., many of which have permanent or semi-permanent water. They are very difficult for access on foot (and quite often one would have to use one's arms as well, because to get in, it is necessary to do some rock climbing). To visit the area in vehicle there is only one option available - drive up the main Paposo valley which has a very good dirt road and then take any side road (there are several short mining roads which go up the northern flank of the Paposo Valley, starting from about 1.5 - 3 km from the beginning of the Paposo valley. So if you are looking for a laidback, relaxing trip you might want to plan something else! Shoot for weekend breaks in England or a cultural trip to Buenos Aires for something calmer. Or, staying in Chile, plan a wine-tasting trip! Only attempt this Paposo trip if you are physically fit and ready to climb a bit. 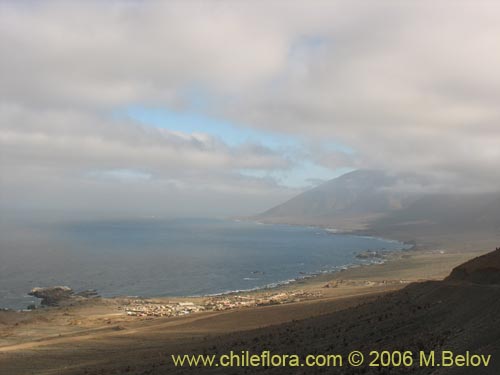 Paposo village. One can observe the narrow coastal plain and the formation of the clouds art an altitude of about 400 m. (the picture is taken from an altitude of 250 m.)

Despite the fact that there is a larger species diversity than at the National Pan de Azucar Park, Paposo is only a National Reserve. In fact, the only thing which gives a hint to the visitor that one is in an area of botanic interest is a closed road and a huge sign.

In floristic terms, it is possible to identify several areas with clearly distinct plant sets.

- Coastal plain with an elevation of between 0 and 150 m. which is strongly influenced by the lack of camanchacas; the only water available for the plants are the normal precipitations of around 25 mm / year and some additional water at the exits from the ravines which may persist for a few days after a precipitation event.

- The lower limit of the fog at about 200 to 400 m. From this point onward the number of days with fog begin to increase and therefore providing a major quantity of condensation water to the plants.

- Main fog area around 400 to 700 m. This area offers the largest humidity and best sun protection. The temperatures are slightly more elevated than at the sea level.

- Upper limit of the fog at around 700 to 1000 m. The humidity reduces strongly and the daytime temperature rises as well, reaching 10º - 15º C more than on the coastal plain covered by fog; on the other hand, the night temperatures, although never freezing, can go as low as +5 º C.

- Permanent or semi-permanent water courses at any altitude, generally concentrating at an altitude between 200 and 600 m.

The coastal plain has a very sparse vegetation cover with few species. The dominant species is Copiapoa cinerea ssp. haseltoniana and some more drought-resistant Nolanas may also be found there. In rainy years annual Nolanas may come out in large numbers, but in normal, dry years it may be impossible to find them. 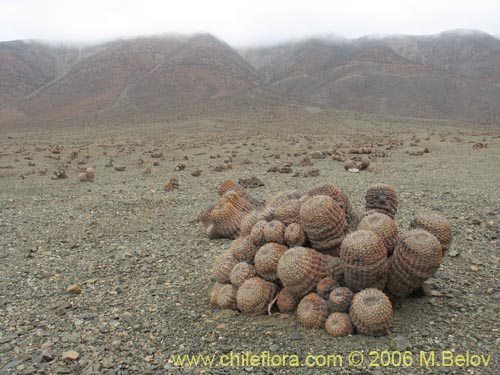 Copiapoa cinerea ssp. haseltoniana on the coastal plain. One can see a larger concentration of the plants at the exit from the ravine (upper center) and the lower fog limit at about 400 m. The photo was taken at 40 m.

In the lower fog area it is possible to find two interesting Bromeliaceae: Puya bolviensis and Deuterocohnia chrysantha; especially the latter one with its compact clutters and red leaves is a dominant feature on the lower slopes facing the ocean; the Puya bolviensis prefers more protected and humid places within the ravines. 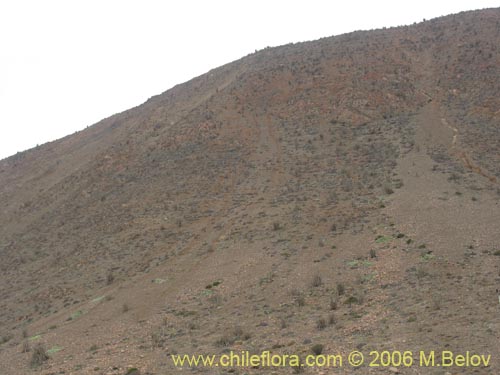 The ocean-facing slope with altitudes of 150 to 350 m which shows the density of Deuterocohnia chrysantha (dark spots on the upper two thirds of the slope and a few cactus Eulychnia in the lower part. 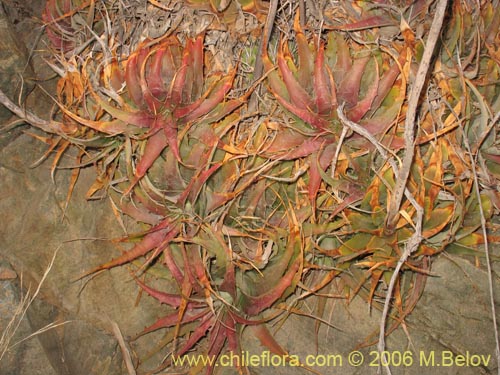 Deuterocohnia chrysantha with its characteristic red coloring of the leaves. 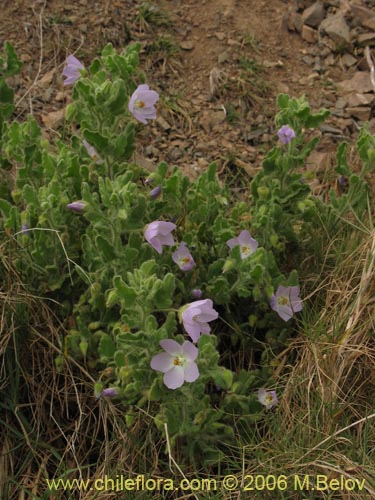 The main fog area at an elevation of 400 to 700 m. is the center of species diversity. The dominant species is Euphorbia lactiflua which frequently appears together with Lycopersicon chilense. At the upper limit of this zone there are abundant Schizanthus laetus, Alstroemeria violacea, Chaetanthera glabrata, Ephedra, Proustia. 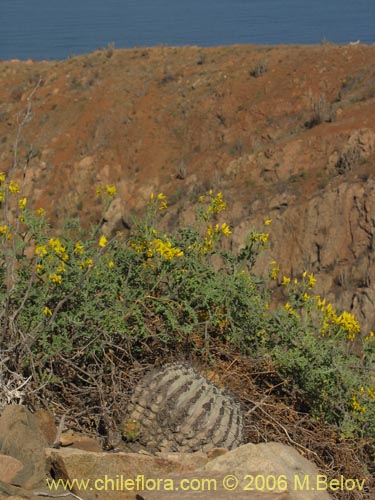 A typical scenery at the lower boundary of the central fog zone (350 m) with Copiapoa cactus and Lycopersicon chilensis. 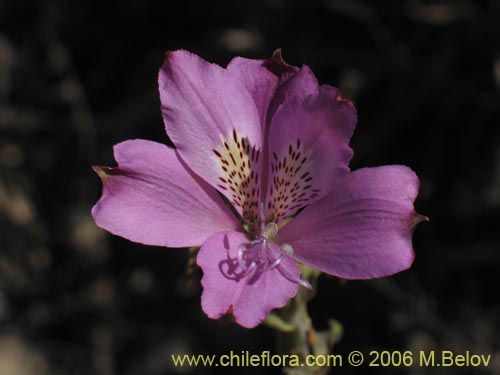 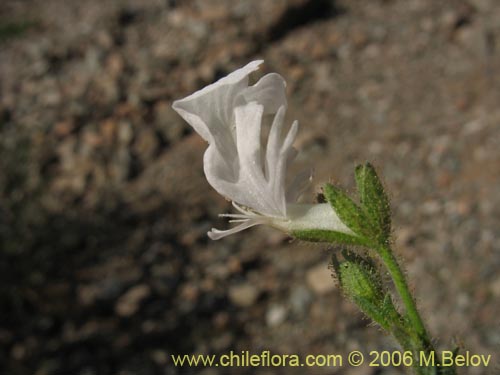 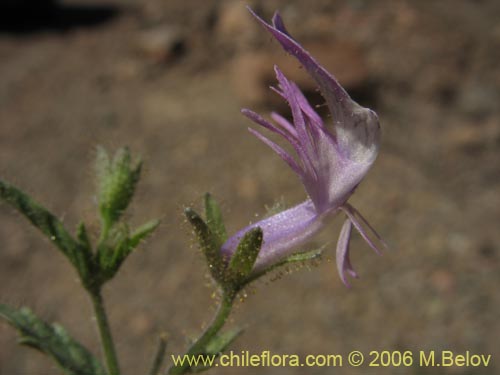 Schizanthus laetus has two colors: white and pink. The pink variety seems to occupy higher reaches, while the white can be found down to 250 m. 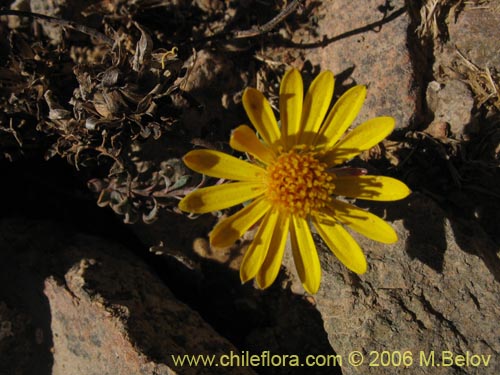 Chaetanthera glabrata is a frequent species in this central zone.

The upper fog limit lies at 700 - 1000 m. In this part Copiapoa cacti appear once again, together with one of the most drought resistant species: Loasa fruticosa. Together with Chuquiraga ulicina and some annual plants they form the upper limit of vegetation. There, one can also find other interesting species like Dinemagonum gayanum, Cruckshanksia pumila, Oxalis. 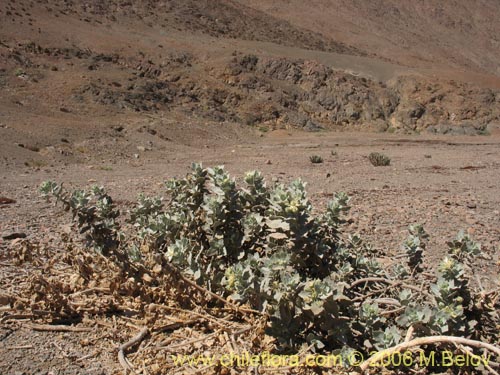 Loasa fruticosa sets the upper limit for Vegetatin at Paposo. 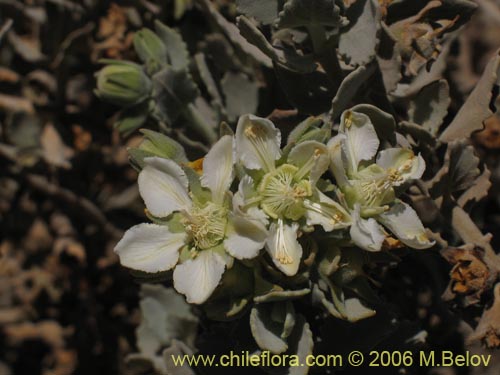 Loasa fruticosa has many white, showy flowers, and, unlike most other Loasa species, it is not stinging; it would be an ideal species for ornamental use for dry zones, able to grow without virtually any water at all. 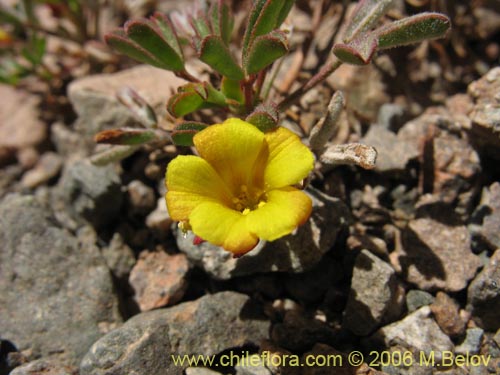 In the area, there are many water courses with permanent water and one of the most important ones is the Paposo Valley. Most of these water courses or "aguadas" as they are called have extremely salty water, but the main watercourse in the Paposo valley has a lower concentration. The aguadas have a large variety of plants like Juncus, Cyperus, Cotula coronopifolia (foreign), Frankenia, Palaua concinna, Cristaria, and many others. 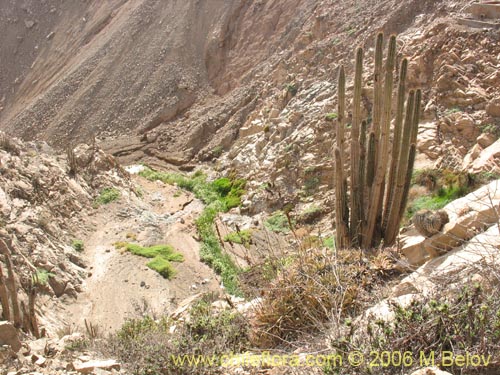 The Paposo valley with running water - one can see dense vegetation of only 5 to 10 m wide and a water course which has a flow of a few liters per second (September 2006) and a width of half a a meter. On the right, Eulychnia breviflora. 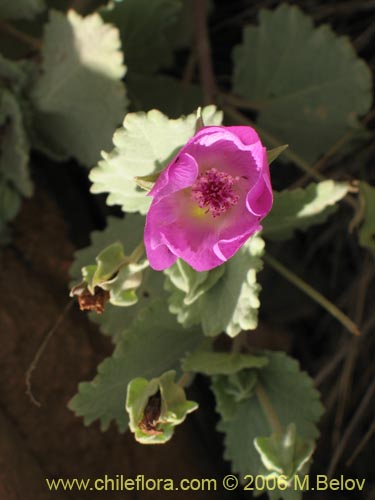