One of the outstanding features of the area around Putre and the Lauca National Park is the fact that there are several places with extreme altitudes accessible by a standard compact-sized car. In this way one can reach without major problems altitudes of 4600, 4750 and even 4800 meters, and if you are fit for it, a short walk of about an hour would take you to over 5000 m. And the most interesting part is that these places are full of plant life! This is one of the highest areas in the world where thriving flora can be found at such altitudes.

Probably the most beautiful place to observe these plants of extreme altitude is the road which goes from Putre to Visviri. It is inside the Lauca National Park, and to reach it you would have to drive up the paved highway which goes towards Lago Chungara up to an altitude of 4200 m. for about 10 km. away from Putre, then, just after passing the military barracks on your left, you would turn left onto an unpaved road which goes to Visviri. The road is in good condition, and in june 2009 it was in the process of being upgraded even further. It is a short 15 km. long drive until the highest point at 4800 m. 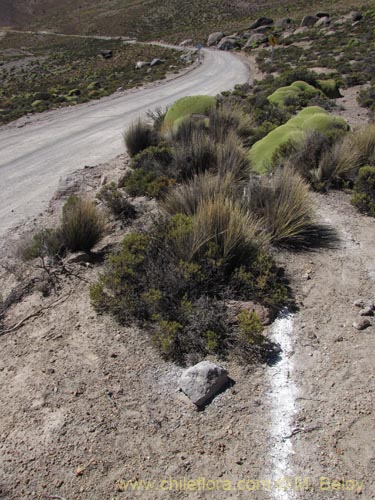 The progress has always two faces. The road to Visviri is being improved and widened, and the white line decides which plants are going to continue to live and which will have to go in the name of the progress. Apparently, a couple of Llaretas, Azorella compacta, a protected species, are condemned in the benefit of a better road connectivity.

The road goes along the western flank of the Nevados de Putre mountain. At the beginning, the flora is not especially rich; it is a Festuca-dominated grassland with just a few species. Soon, first red spots of Cumulopuntia boliviana ssp. ignescens appear; these are dense and high mounds or cushions of up to 60 cm. high and sometimes up to a meter in diameter. The fruits of this cactus are edible, but be careful when trying them, because apart from the normal large needles, the fruits have myriads of almost invisible white hairs which are very difficult to get out of the skin (not to speak of the mouth!). 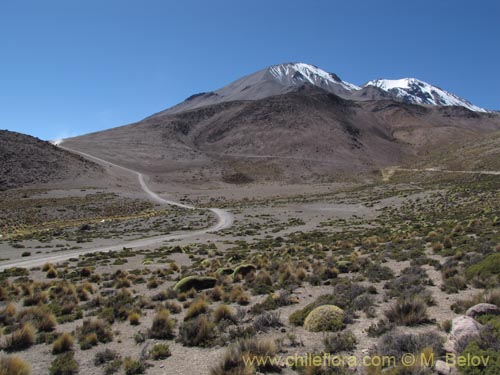 View at the road which goes to Visviri and towards the Nevados de Putre mountain.

There are huge rocks on the right side of the road which create a special protected habitat with lots of shade and much more humidity where Caiophora rosulata is at home. Another species worth mentioning is the Adesmia spinosissima, and if you look carefully, you may spot the first Nototriche plants. 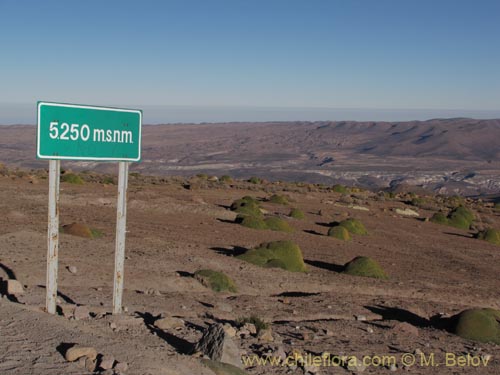 From this turn, the road continues to climb for the next 4 kilometers until it will reach an altitude of 4800 m. in another sharp turn to the right. This is the highest point of the whole trip and there are several traffic signs which indicate an altitude of "5250" meters! Apparently, the military and the road department who are the authors of this misunderstanding did not have working GPS equipment when they measured the altitude of this spot... or maybe it was a calculated gamble to feed upon the ego of the gringos... Who would not like to pose at a sign which states that you are much higher than any mountain in the Alps? On the other hand, the 4800 m. (or 4785 m. to be precise), even if impressive, is a little bit lower than Mont Blanc with 4810 m... There is an easy solution though - just walk up the hill, 200 steps will safely take you above that limit... 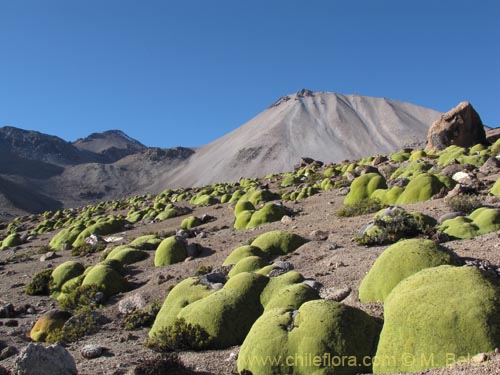 Azorella compacta in this area reaches altitudes higher than 5000 m.!

And the view around is impressive, in the north one can see a mountain chain with the dominant 5988 m. high Tacora volcano on the border with Peru, in the west one can almost feel the Pacific Ocean hidden under the coastal fog banks, at less than 90 km. in straight line, towards the south one can see the plains and "low" 4000 m. high mountains which surround Putre. And finally, in the east the high peaks of Nevados de Putre tower over the observer. And in the center is an area full of plants, with more than 10 species which dared to colonize this beautiful and hostile landscape. 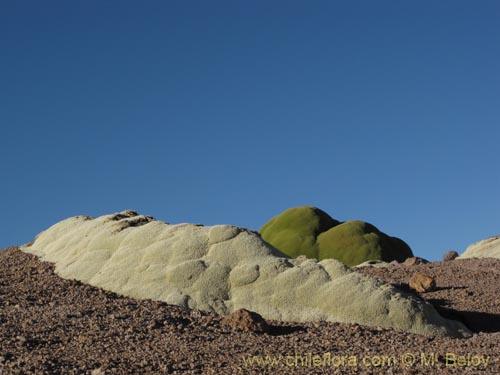 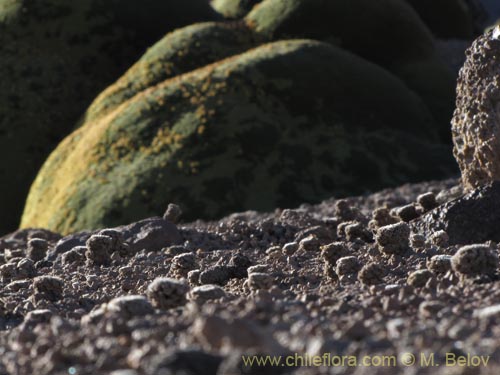 One of the most surprising plants of high altitudes - Nototriche.

One of the most interesting species that be can seen in the area is Nototriche belonging to the Malvaceae family. There are about 100 species which grow exclusively in South America, and in Chile there are about 23 species, and one of the most distinctive features of this genus is that it grows exclusively at high elevations. In fact, out of 23 species, only 6 are reported to grow below 4000 m., and there are several species which break the 5000 m. barrier! 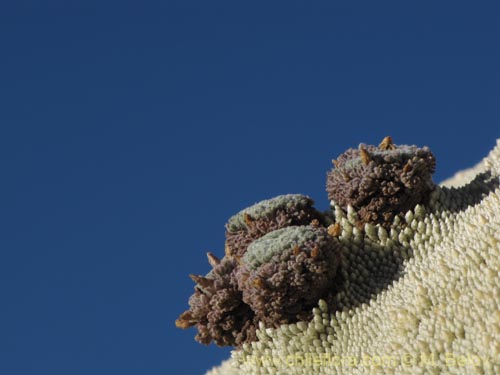 The Nototriche plants are pigmy, just a few centimeters high, forming miniature towers, but they are very attractive due to relatively large, beautifully shaped and colored flowers. They are often found in large concentrations, like here, where there are more than 100 plants per square meter! They blend so well with the ground, that they are difficult to see if you do not know what you are looking for.

In june, out of thousands and thousands of individuals, only two Nototriche could be found still in flower.

There are two other areas which can be recommended for visiting and where one can easily observe species of extreme altitudes without having to walk on foot: the first is the main paved road between Chungara Lake and the vantage point from which the Cotacotani Lakes can be seen, inside the Lauca National Park. This area is located at more than 4600 m. and offers the special bonus of being able to see a tree species which probably is one of the highest-growing trees on earth, reaching altitudes of up to 5200 m. 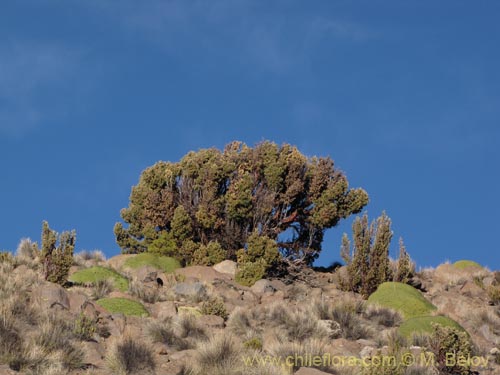 There are two species of Polylepis in Chile, Polylepis rugulosa which prefers elevations of about 3500-4000 m. and Polylepis tarapacana which has a wider altitudinal distribution range from about 3600 to 5200 m. That is, the last altitude mentioned is apparently valid for Bolivia. In Chile the maximum altitude where this species grows seems to be close to 5000 m. At the international highway one can observe trees at an altitude of 4700 m., surrounded by Azorella compacta y Festuca orthophylla. 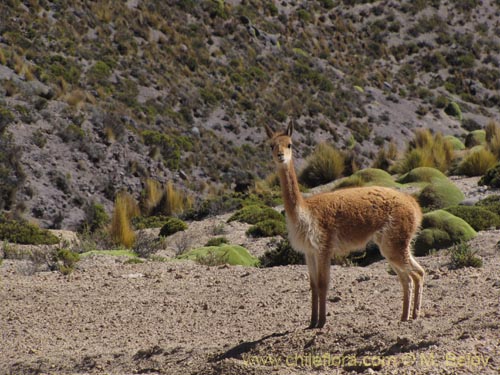 To run or not to run... Not all is about plant life. The shy Vicuñas can often be seen around the Chapiquiña Pass and also along the International Highway which goes to Lago Chunagara.

Another interesting area is the Chapiquiña pass. In itself, the altitude of the pass area is not especially high, "just" 4400 m., and the vegetation is not exceedingly varied either, but just at the pass there is a mountain with antennas and servicing road which allows you to reach 4750 m. 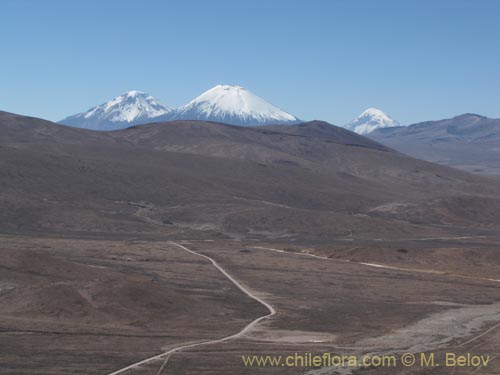 All this area has very good unpaved roads, and I have climbed the zig-zag which leads to the antennas in compact Chevrolet Corsa without any problems. Here one can observe several high mountain species, like the ever-present Chachakoma, Senecio nutans, which can be easily recognized by the reddish flower heads which hang down and which the local Indians use to fight the effects of puna or altitude sickness. Senecio zoellneri is an impressive plant with long lanceolate leaves of almost 15 cm. which seem to be white due to the tomentose hairs. The cactus Cumulopuntia boliviana subsp. ignescens surprises with its strong red flowers and sets an altitudinal record for the family here at 4700 m. One of the strange-looking plants of this environment is Leucheria daucifolia, a prickly species with menacing appearance. I have observed a few individuals at 4650 m., but a little bit further down, at 4200 - 4400 m. it grows like a weed on the side of the road. 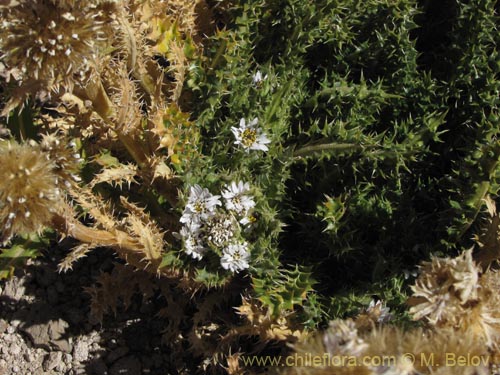 Partial List of Plants which grow at extreme elevations (over 4600 m.)