The 50 kilometer trip from the civilization to Alerce Costero National Park took only an hour. Judging from the map, the distance from Alerce Costero to the shores of the Pacific Ocean is only 30 kilometers and, considering the relatively fast progress during the first leg of the trip, that part should have taken just over half an hour. Well... that was wishful thinking. After leaving the entrance to the Alerce Costero, a few hundred meters further on, the road became very bumpy with rocks and immense boulders protruding everywhere and slowing the car to 20 km. per hour. Here and there were still some good stretches, but when you get into these rocky parts, anything over 10 kilometers begins to kill the shock absorbers, and one feels like riding a galloping horse. Further on the road became even worse, and the average speed dropped to 8 km, and it seemed like one was driving on huge staircases, maybe not as steep as real ones, but nonetheless with the same steps, and each step was reverberating painfully in one's back. In the end, I have reached the shore in just under three hours instead of thirty minutes... 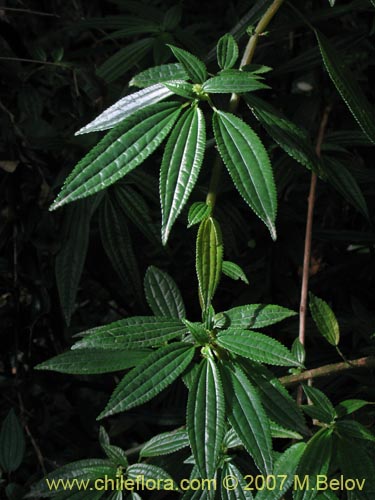 A beautiful, but quite rare shrub which prefers very shady places can be found on the approach to Hueicolla - Pilea elegans.

Hueicolla is an interesting vacation village, very small, quite neat, and almost without any inhabitants - in the whole village there were just two cars - the summer season was over. It is the preferred place for the well-off ecologists from Valdivia. Valdivia is just 60 km. away in straight line, but if you are driving, it is virtually impossible to make it here under five hours. So the presence of an airstrip in such a place off the beaten track was actually not very surprising.

Beware though that there is a road bordering the shoreline from Corral (you can get there on a ferry boat from Niebla, about 20 km. to the west from Valdivia city), and on the map it looks like a nice alternative. When I was driving towards the ocean beach I was looking for a bridge across the 50 meter wide river which should connect this river shore to that road on my right, and I could not see it. Once again wishful thinking! When I was almost at the ocean beach, on the other shore of the river I saw a narrow road plunging deep into the water. Looking from this side, the river was at least 50 cm. deep, and quite possibly much more at the center. For that day I had enough adventures, so I decided not to test the limits of the jeep and the patience of the nature and ignored the challenge. But if you choose that road, be prepared to do some real 4x4 swimming get to Hueicolla. 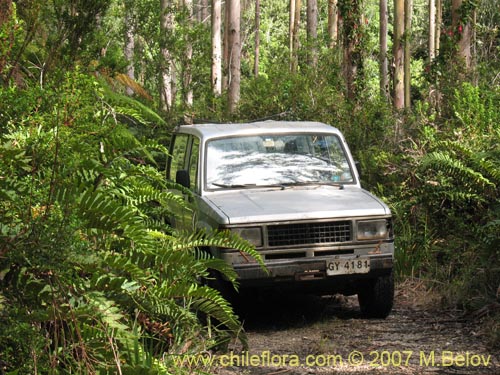 In broad daylight the road from Lameguapi to Hueicolla does not seem to be as eerie as it seemed in the dark, but still the ferns (Blechnums) are quite impressive. However, there was one detail I missed in the night - the trees behind are Eucalyptus. The so-called civilization reached even these forlorn places and displaced the native species. A shame!

On the map there is a road which goes further on to Lameguapi and La Barra from Hueicolla. Since it was too close to civilization to sleep over in the car at Hueicolla, I decided to drive a little further and to try to get down to the beach. It was getting really dark, the scenery became eerie, dense fog was slowly engulfing large tree trunks, hiding away the terror which might be lurking in the lush undergrowth on both sides of the road. The visibility dropped to a few dozen meters, and the only positive thing was that the road was in good condition and I did not have to dodge the hidden rocks and potholes as during the approach to Hueicolla. 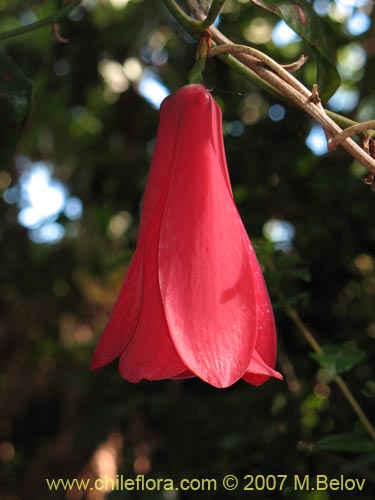 Lapageria rosea or Copihue in Spanish can be found all along the way, brightening up the rather gloomy and sinister atmosphere. 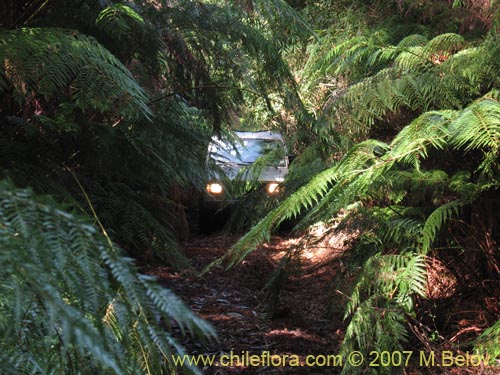 Huge leaves of ferns (Lophosoria quadripinnata) hang down from both sides, making the car look like a hungry dinosaur.

About 8 km. from Hueicolla an almost invisible hand-painted sign pointed to the right, indicating that Lameguapi was near. The undergrowth moved in and began to close over the head, with branches banging the rooftop and lateral mirrors - I was driving in a real tunnel of what seemed to be ferns and bamboo, and the plants were reaching for that strange two-ton metal object of mine that dared to disturb their peaceful dreams and attacking it with all the strength they had. And the best part of it was the fact that I could not now turn back - the tunnel was barely 2 meter wide, with quite sizable tree trunks preventing any attempt at turning around. 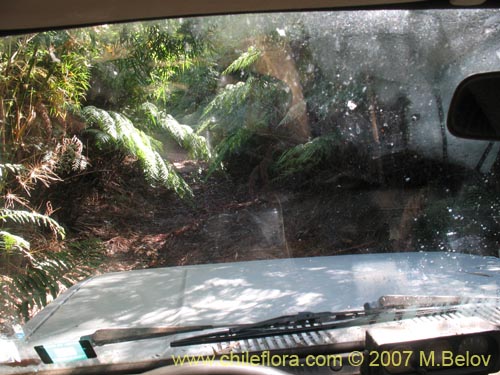 That is how it looks from inside the car at noon! Imagine the same scenery at night, alone, with fog all around...

After crossing a few bridges and descending very gently during what seemed to be an eternity (and in reality it was only three kilometers), I have begun to hear the thumping of heavy sea. The end was near, or so I hoped. Suddenly, the road plunged down at about 30°, made a couple of sharp turns and came to a full stop in a 5 x 5 meter clearing, just enough to turn around. I turned around, cut the engine, and sat there for a while in the dark, listening to the sea and breathing in the strange atmosphere - jungle was all around me, above me, its strange scent slowly seeping in through the windows, waking up in me the primeval fears of prehistoric people who had to face day after day. 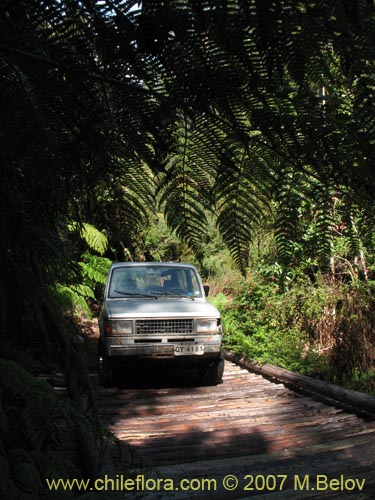 Surprisingly, the road is maintained in very good conditions, with neat, small, but sturdy bridges.

No, it was too much even for me, I climbed back onto the flat part of the road and I drove a few dozen meters to a slightly less dense stretch where I passed the night.

The morning sun dispelled all the ghosts of the past and the surroundings did not seem as surreal and strange as during the night. A short walk down brought me onto the beach. 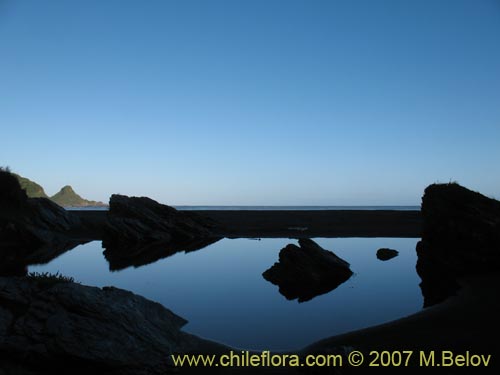 From my past experiences at the shore in many places in the central Chile, I did not expect to find anything interesting on the beach, but I was in for a surprise. It was really teeming with beautiful and not-so-common native species. Nolana paradoxa was at the forefront, growing in the sands of the beach; on the rocks falling into sand banks several species of Bromeliaceae can be found, among them Fascicularia bicolor and Greigia sp., and further inland predominated the thickets of a low shrub, Griselinia jodinifolia which has beautifully shaped, but pricky leaves, intermingled with Chusqueas and Escallonias with beautiful bright-red flowers. 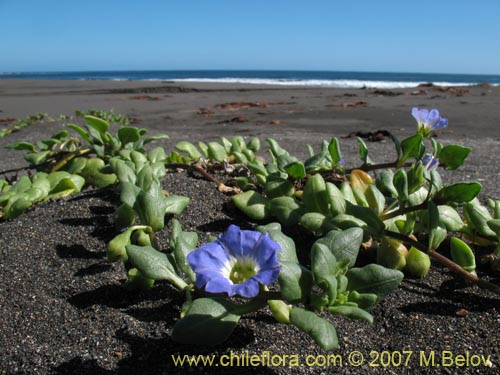 Nolana species proliferate in the northern parts of Chile, but Nolana paradoxa is an exception and grows as far south as 40° latitude. Here it is at the southern limit of its distribution.

There is a small village with just a few houses and a couple of boats about two kilometers south of the place where I made my beach landing - later locals told me that there lived only four families. These people maintain trails along the coast for their own needs - without these trails, which, like the access road, also seemed to be quite well-kept, it would be absolutely impossible to make any progress in the thickets and would leave them virtually stranded. In steep, rocky places short ropes help to get through the obstacle. 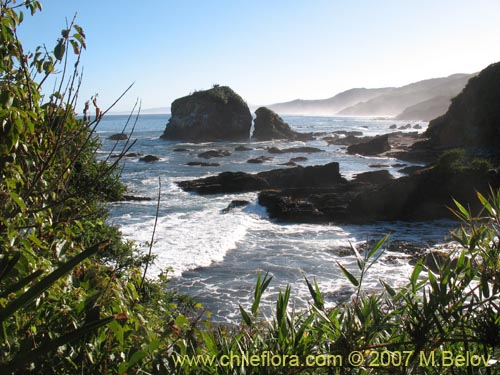 View from a trail along the coast. 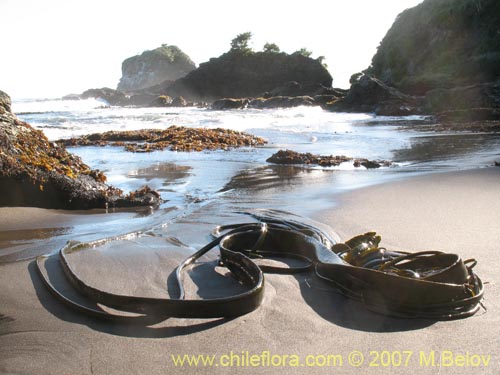 This strange creature which at night might scare all the wits out of one is nothing more but a seaweed, which is edible and can be found even in supermarkets - Cochayuyo! 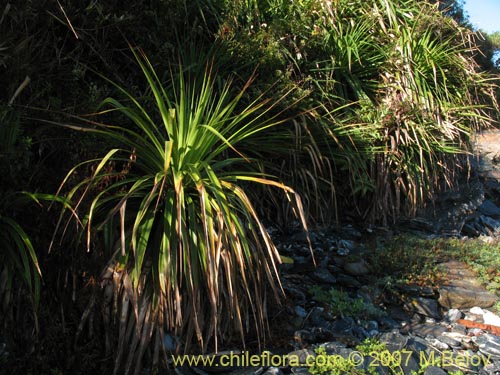 Huge Greigia sp. sit on the rocks with their leaves almost touching the beach sand.