La Serena is famous for no reason as one of the best holiday spots in northern Chile. In reality, it would be one of dullest and boaring places, would it not be for the fact that it is a stepping point to one of the most breathtaking trips you can make in Chile in a regular car, not a 4x4. No, no, I am not talking about another phoney place nearby - Valle del Elqui. Forget about it, the so called "aura"  and "mistique" which Valle del Elqui is supposed to have and about which you will read on almost all internet pages dedicated to La Serena comes from businesses and hotels which try to sell their products, not the real beauty of Chile. 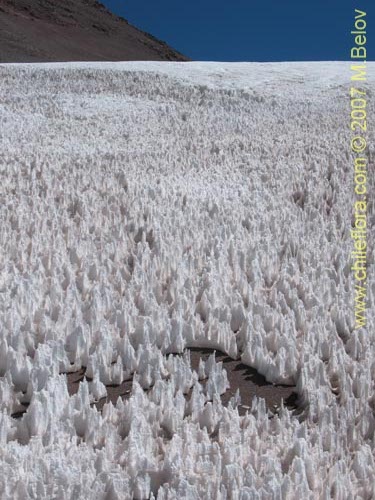 At altitude of 4500 meters and just 1 km. from the Argentina border the melting snow leaves "petinentes," called so because they resemble the praying monks. To see this you do not have to do any real mountaineering or to own a super jeep - a regular car will take you right to the side of these strange snow formations!

The true beauty of this area can be found some 200 km. towards the east from La Serena - the Agua Negra Pass - a dirt road which crosses over into Argentina, reaching at its highest point the altitude of 4759 m. The scenery there is unbelievable, and I was lucky that I visited that area before the pass was officially opened for the season in October, so there was no traffic, and the snow was still lingering on in many places.

To reach that area one has to drive east from La Serena some 150 km. through Vicuña and than past the road to Valle del Elqui to Junta del Toro. The first part of the trip is woefully uninteresting, and only the last 20 km. before Junta del Toro native vegetation begins to appear. But really interesting area begins after passing Junta del Toro. There the real adventure starts. Two options are there - one is to visit the Paso de Agua Negra, another 90 kilometers, or for a shorter trip one can drive towards Las Hediondas mine and the abandoned El Indio gold mine. 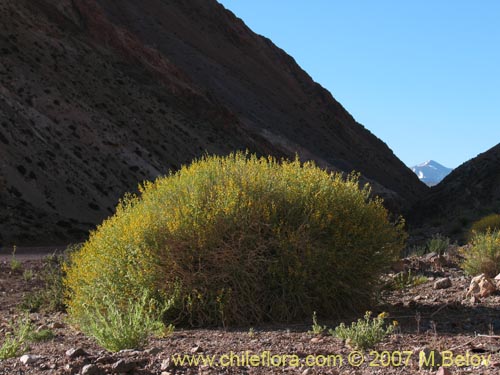 Adesmias are most prominent plants in this area

The road to Agua Negra scenically is not very exiting at the beginning, however, one can see several interesting species on both sides of the road, including Schizanthus, spheric Adesmia shrubs, Chaetantheras, especially the Chaetanthera flabellifolia, Menonvillea cuneata, and so on. In rocky places you can observe Calceolaria flavovirens. Do not expect to find Eden’s garden here, though, because the goats are working hard at keeping at bay the native plants. Luckily, they apparently do not eat some, and you can find an interesting plant, Oreopolus palmae, a cousin of Oreopolus glacialis which grows in more southern areas, just a few dozen meters from a shepherd cabin. 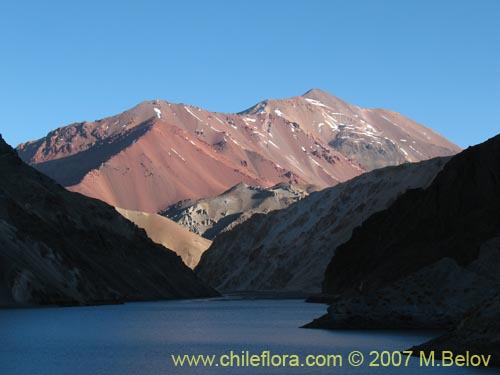 The lake at 3100 meters is simply called Embalse La Laguna (Lake Dam) and lightens up the barren slopes.

After some 30 kilometers the road reaches an artificial lake at 3100 meters, dammed to regulate the water flow for the valley below. The landscape turns more and more barren, but not without wildlife. Wild geese are a common sight here, along with many other bird species, including the Condor. 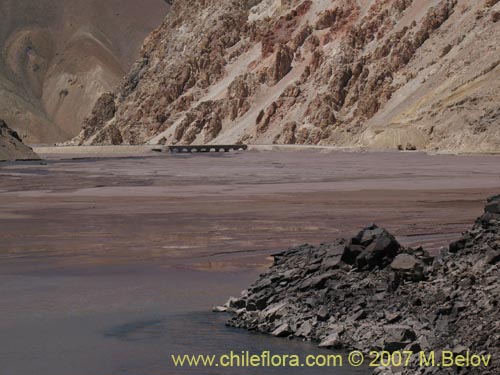 A bridge crosses the river which feeds the lake.

Past the lake the road begin a long, sustained climb following the bottom of a narrow valley. The vegetation is sparse here, and is concentrated around brooks and small vegas. There, Azorella trifurcata is worth mentioning and also hydrophile plants, like Cardamine and Mimulus. 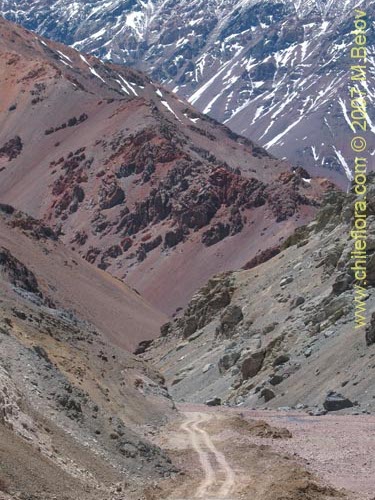 The road enters the high Andean mountains and begins a slow, but steady climb from 3100 m. to 4000 m. along the mountain valley. 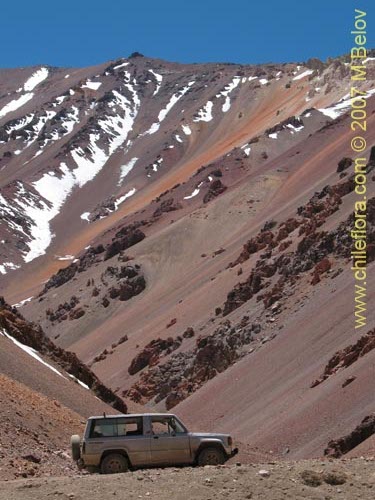 The slopes are very barren, and the plant life concentrates around water courses.

The road continues on following a long valley which goes around the peaks reaching over 5000 meters - Cerro Los Bañados y Cerro Tapado. Some 15 km. from the lake the road climbs away from the valley floor. 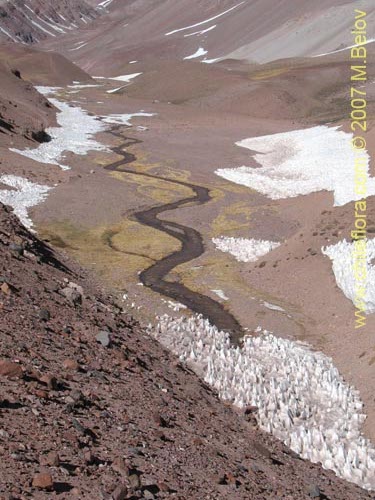 Soon the first snow fields begin to appear, and then a stunning view open up to the left to snow-covered peaks. 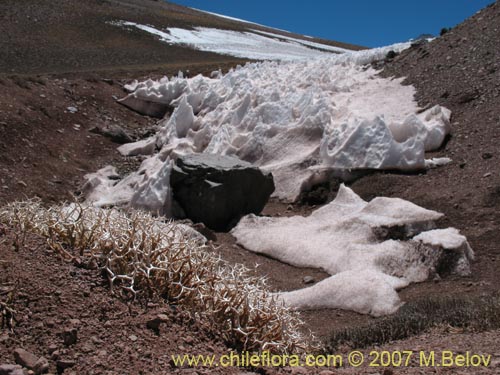 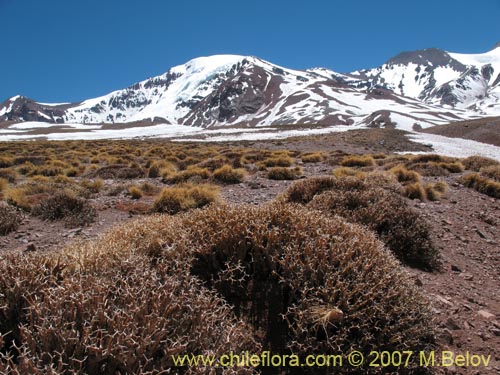 The high altitude vegetation was dormant when I visited this area, it was first week of December, so only few species could be seen and identified. It is a kingdom of hardy adesmias, with the dominant species being Adesmia echinus, a pricky plant able to withstand the most harsh conditions. It grows up to an altitude of 4500 meters and is one of the hardiest shrubs in Chile. Among other plants to be seen there one can single out Nastanthus caespitosus, a counterpart of the more southern Nastanthus agglomeratus and Nastanthus spathulatus. The poaceae are represented strongly by the Festuca plants here.

On this occasion I was not able to reach the pass at 4759 m., because the snow blocked completely the road from 4500 m. on, and walking on foot, even just 1 km and climbing 200 vertical meters is too much without acclimatizing. So I had to turn back this time with dizzy head and amazement at the beauty of the snow...