The extreme north of Chile is always associated with extreme dryness, sparse vegetation, never-ending desert.... and when one arrives for the first time to the region, be it to Iquique or Arica, this impression seems to be confirmed - vast extension of dunes or rocks covered with sand without the least sign of life. 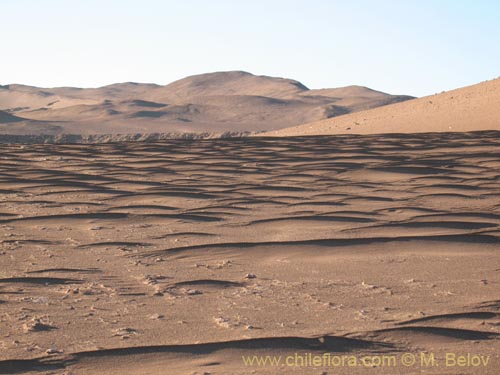 Dunes around Iquique: Almost devoid of life and with only one species which manages to survive in an environment where there are less than 2 mm. of annual precipitations: Tillandsia landbeckii.

When you start driving up from Arica to Putre through the Lluta Valley, this first impression seems to confirm itself - the road goes along a valley which has at best a dozen of native species and the rest is occupied by the intensively cultivated crops which is possible due to the water which comes from the high mountains. The fertile Lluta Valley is a long, green oasis, very narrow, never wider than 1 km. and in many places as narrow as just a few hundred meters, running from Pacific Ocean to about 60 km. inland, dwarfed by immense walls of the valley slopes towering in some places to more than 1000 m. above the valley floor. The life outside the bottom of the valley seems to be non-existent, and only in a few hidden places which one has to know well beforehand to be able to see this miracle there are two species of Tillandsias, Tillandsia macronae and Tillandsia landbeckii which manage to survive by obtaining the water from the humid Pacific air. 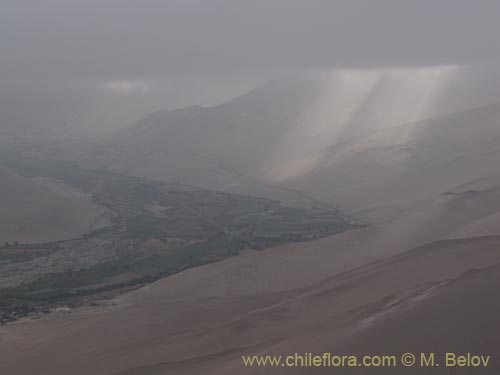 Once the paved international road which leads to Putre, Lago Chungara, and Bolivia leaves the bottom of the valley, the plant life disappears completely until reaching an altitude of more than 2000 m. The first plants to announce the reappearance of an habitat where flora can thrive show up at about 2000 m., and are mainly Trixis cacolioides, called in Spanish as "Yerba linda" or "visavisa" in quechua and which is supposedly good for the rheumatism. This plant sets the lower limit of desert vegetation in this area. But until one reaches 3000 m. the vegetation remains rather sparse, being concentrated at the bottom of small, dry valley beds. 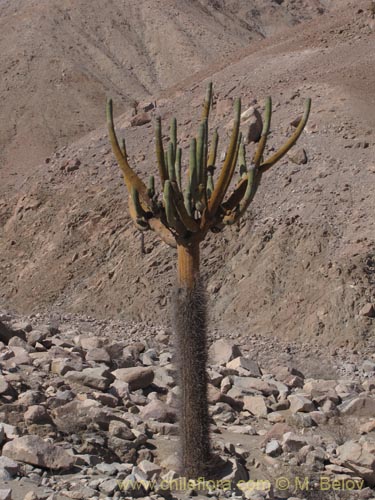 There is one plant which stands out in this arid environment - Browningia candelaris, an impressive cactus which can reach a height of 5 m. and the silhouettes of which with wide-spread arms along the surrounding mountain crests reminds somewhat the Araucarias of the South. It is truly an enigmatic tree in these arid landscapes which was exploited and decimated, its timber was used for construction (that is one of the few species which has to offer construction timber, the other being two Polylepis species, Polylepis rugulosa and Polylepis tarapacana which can be found higher up at around 4000 m. and maybe the Corryocactus brevistylus) and the fruits, being edible, are often collected, so that the natural regeneration of the species is under serious doubt. Add to this the effect of the global warming and climate change and it will become clear that the future for this giant looks rather bleak. Many individuals show signs of damage and drying out. A low growing cactus, Haageocereus fascicularis, accompanies it often, and this latter seems to be much more resistant to the adverse conditions. 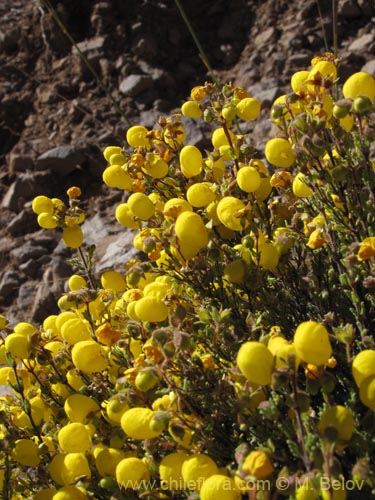 Calceolaria inamoena, a frequent shrub along the way to Putre.

When you get closer to Putre (about 20 km. from Putre) the species diversity and the vegetal cover becomes very surprising: there are at least 100 species with a cover of up to 70 % with many shrubs 1 meter tall. The appearance of vegetation is quite different from the rest of the Chilean Altiplano, such as is the case of the II Region; near San Pedro de Atacama, for instance, the vegetation cover is very limited until one reaches an altitude of 3800 - 4000 meters and from that altitude onwards it presents itself as typical "Tolares," i.e. low growing bush or "Pajonales," high altitude grasslands, with rather low species diversity. Here, near Putre, at elevation of between 3300 and 3800 m. in a mountainous and steep terrain there is a vegetation belt which nominally could be called as "Tolar" due to the presence of the shrub species, but which in realty has much more species than the "normal" Tolar. In this sense the area around Putre is a unique habitat in the northern Chile. The general impression reminds much more the vegetation of high mountains around Santiago or even further south, and this is a striking contrast to the driest desert in the world which is only 50 km. away from the Putre area, where it may rain once every decade.

The other surprising aspect of the area is the large number of plants with big, showy flowers where the dominant color seems to be yellow. It is enough to drive slowly along the main highway (careful with the heavy truck traffic along the route!) from Zapahuira up to the entrance to Putre to be able to see several dozens of highly ornamental species. 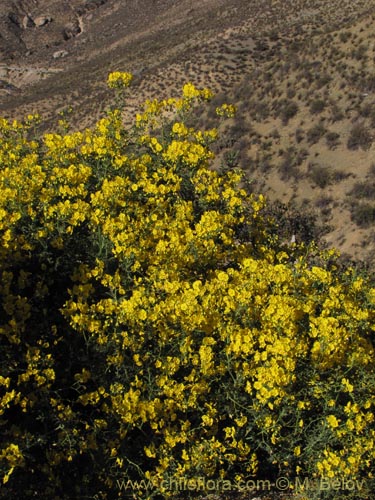 Solanum lycopersicoides, one of the most visible species of the areas.

If we compare the flora of Putre with the flora of let us say San Pedro de Atacama, Ollagüe, or Salar de Aguas Calientes (near Salar Tara), where the vast majority of species has small flowers, here one is surprised by the fact that many species are full of attractive flowers: Solanums, especially Solanum lycopersicoides (not to be confused with Lycopersicon chilensis which is superficially similar!) which, with its profuse yellow flowers, presents itself as an interesting shrub visible from several hundreds of meters away. The Solanum nitidum shrub and the low Solanum pulchellum which can be grown in pots have blue flowers. Another impressive species from the same solanaceae family is Dunalia spinosa which has many big violet flowers and attractive red fruits. 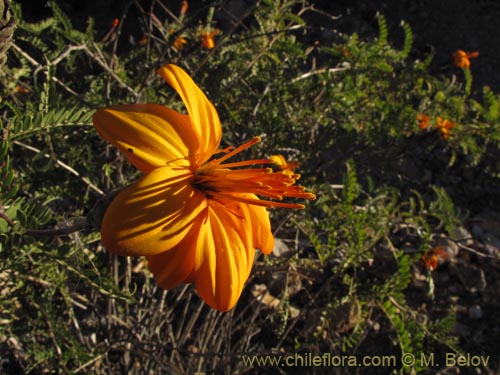 There are two species of Mutisias, Mutisia acuminata is a large shrub which can reach almost two meters full of orange flowers and Mutisia hamata is somewhat lower, but with even more prominent red flowers. 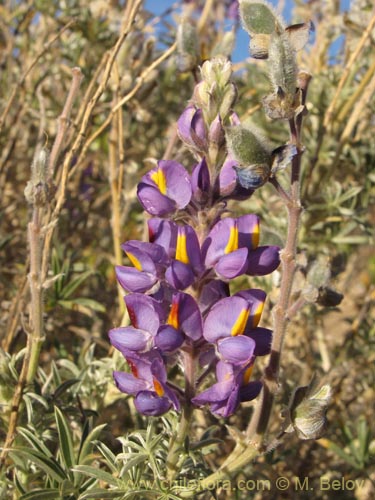 Other species worth mentioning are Balbisia microphylla, Lupinus oreophilis, the latter growing almost as a weed along the roadsides and when in full bloom presents a spectacular show of blue flowers with a narrow yellow strip which accentuates their beauty. There are also Calceolaria inamoena, very frequent on the slopes at lower elevation, verbenas, especially the rather abundant Verbena gynobasis, other members of the fabaceae family like Dalea pennellii var. chilensis and Senna birostris var. arequipensis... 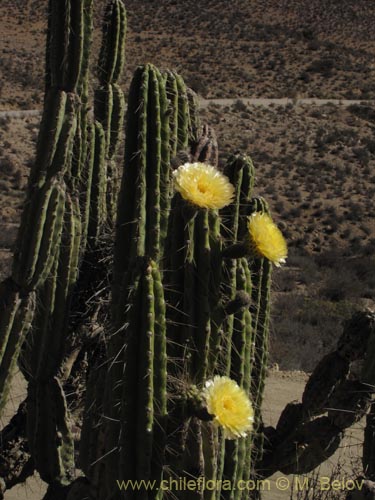 The cacti are also represented here by several attractive and impressive species. It is enough to think about the Corryocactus brevistylus which surprises with its huge yellow flowers which reach 15 cm. in diameter! The only downside is that this plant is rather big and grows to a height of more than 5 meter! Several Oreocereus stand out due to their special apical red flowers. 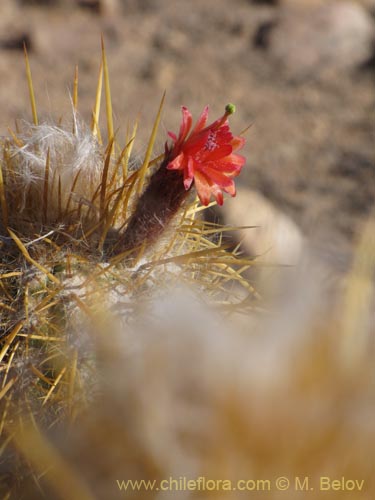 The low-growing Oreocereus hempellianus can easily be cultivated in large pots, while Oreocereus leucotrichus may need several square meters to show itself in full splendor. Neowerdermannia chilensis is another interesting small-sized alternative. 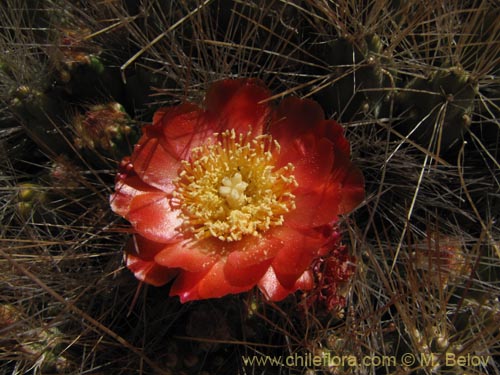 For cold areas Cumulopuntia boliviana ssp. ignescens with two subspecies will work very well, because in its natural habitat it tolerates temperatures as low as -20º C and can withstand an occasional snow storm.

Partial List of Plants which can be seen in Putre Area